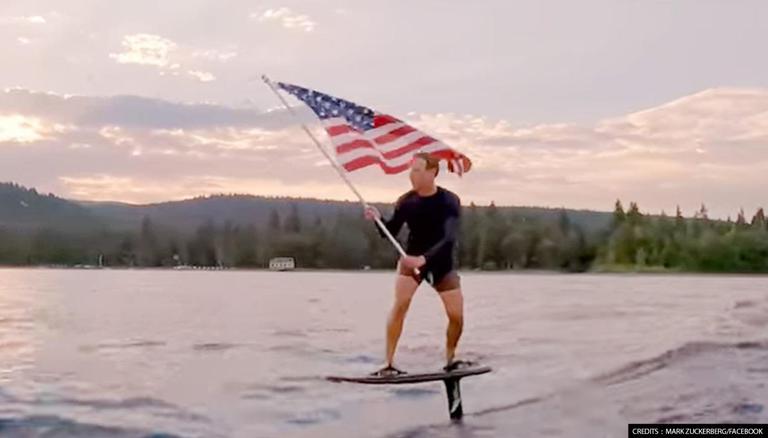 
Facebook CEO Mark Zuckerberg on July 4 posted a video of himself waving American-flag waving while surfboard-riding, on social media in a bid to celebrate Independence Day. “Happy July 4th!” read the caption. In the clip, Zuckerberg can be seen gliding through the water with the US flag. In the background, one can hear John Denver's anthem to West Virginia, "Take Me Home, Country Roads" playing. Zuckerberg appears to be riding an electric surfboard on an idyllic-looking lake.

Since shared, Zuckerberg’s video has become fodder for memes. It joined other extremely random content from the tech billionaire in the past that includes surfing while wearing what looked like a whole tube of sunscreen as a “disguise” from paparazzi. Several social media users roasted the CEO for his video and called him “weird”.

One user wrote, “Here's Zuck's latest attempt to deflect accusations that he's an android”. Another said, “Here is Mark Zuckerberg proving he’s not just richer than you, he’s more patriotic”. “Here is Mark Zuckerberg, perfectly summarizing why the rest of the world hates Americans,” added third. “I’ve never felt sorry for a song before but this one has been through so much,” said fourth.

Meanwhile, the video comes a week after a federal judge threw out government antitrust lawsuits brought against Facebook by the Federal Trade Commission, dealing a major blow to the effort to rein in the social media giant. As per reports, US District Judge James Boasberg in Washington on June 28 granted the social media network’s requests to dismiss lawsuits filed by the FTC and state attorneys general in December. The dismissals of the antitrust lawsuits came in a pair of rulings before any pretrial proceedings that had progressed. Further, the judge also said that the officials failed to “plausibly” establish that the social network had created a monopoly.

The antitrust lawsuits could have rolled back Facebook’s acquisition of Instagram and the messaging platform WhatsApp. As per reports, the judge in a 53-page opinion said that it “failed to plead enough facts to plausibly establish a necessary element... that Facebook has monopoly power in the market for personal social networking services.” However, he allowed authorities the opportunity to refile the case that the federal lawsuit.