A rocket attack on a crowded market in a town held by Turkey-backed opposition fighters in northern Syria has killed 15 people and wounded dozens, an opposition war monitor and a paramedic group said. 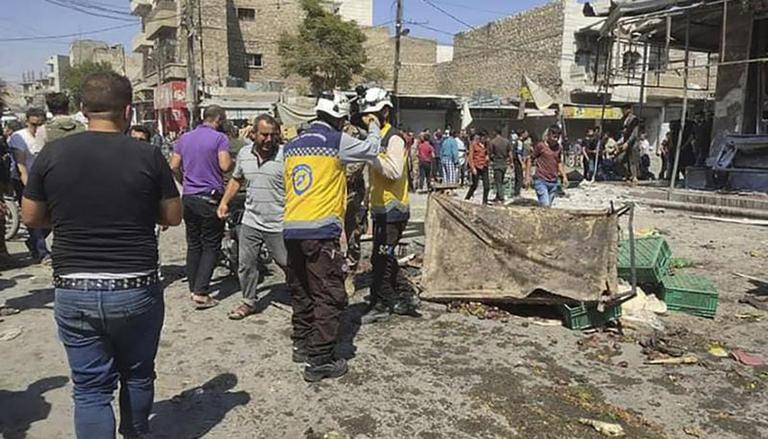 
A rocket attack on a crowded market in a town held by Turkey-backed opposition fighters in northern Syria has killed 15 people and wounded dozens, an opposition war monitor and a paramedic group said.

The attack on the town of al-Bab on Friday came days after a Turkish airstrike killed at least 11 Syrian troops and US-backed Kurdish fighters.

The Syrian Observatory for Human Rights, an opposition war monitor, blamed Syrian government forces for Friday's shelling, saying it was in apparent retaliation for the Turkish airstrike.

The Observatory said three children were among the 15 killed, and that there were more than 30 wounded.

The opposition's Syrian Civil Defence, also known as White Helmets, had the same death toll but said 28 people were wounded. The paramedic group said its members evacuated some of the wounded and the dead bodies.

“This is the worst massacre committed by regime forces since the battles stopped between the regime and the opposition,” said the Observatory's chief Rami Abdurrahman, referring to a cease-fire in March 2020 that ended a wide Syrian government offensive on rebel-held areas.

The US-backed Kurdish-led Syrian Democratic Forces said in a statement that its fighters did not shell al-Bab. There was no comment from the government.

Turkey has launched three major cross-border operations into Syria since 2016 and controls some Syrian territory in the north.

Although the fighting has waned over the past few years, shelling and airstrikes are not uncommon in northern Syria — the last major rebel stronghold in the country.

Syria's conflict, which began in March 2011, has killed hundreds of thousands and displaced half the country's pre-war population of 23 million.

President Bashar Assad's forces have regained control of most parts of Syria over the past few years, with the help of their allies, Russia and Iran.

In other developments, the Observatory and the US military said a drone strike late on Thursday night in northeastern Syria killed four women and wounded several others.

The Observatory blamed Turkey for the strike, saying it targeted a facility where Syrian Kurdish women were doing sports.

A female Syrian Kurdish commander with the US-backed forces was visiting at the time of the attack, the Observatory said.

A US military commander, Maj. Gen. John Brennan, condemned the attack and said the drone struck a group of teenage girls playing volleyball under a UN education and outreach programme.

“Such acts are contrary to the laws of armed conflict, which require the protection of civilians,” Brennan, commander of the Combined Joint Task Force, said in a statement.

Brennan also said the “increase in military hostilities in northern Syria is creating chaos in a fragile region" and called for immediate de-escalation from all sides in the conflict, citing the still-present threat of the Islamic State group in the area.