At least 15 people were killed and another 70 injured when an overpass carrying the Mexico City metro partially collapsed onto a busy road on Monday night.


At least 15 people were killed and another 70 injured when an overpass carrying the Mexico City metro partially collapsed onto a busy road on Monday night. According to AP, Mayor Claudia Sheinbaum informed that 34 of the injured were hospitalised and people were still trapped inside the train, which was split in two and suspended. Following the incident, several videos of social media showed a car trapped under rubble, with dozens of rescuers searching through the wreckage from the collapsed structure.

Sheinbaum said, “A support beam gave way,” adding that the beam collapsed just as the train passed over it. The mayor said that rescue efforts were briefly interrupted at midnight because the partially dangling train was “very weak” and a crane had to be brought in. “We don’t know if they are alive,” Sheinbaum said of the people trapped inside the subway car.

A tragedy occurred, the metro on line 12 with the bridge in Mexico City fell, there are many injured and people trapped in the wagons, I hope their relatisituation.ot in that situation

According to reports, it is still unclear if most of the dead were on the subway car or whether they were pedestrians or motorists caught below. Following the incident, police and firefighters cordoned off the scene in the southern borough of Tlahuac. The collapse occurred on the newest of Mexico City’s subway’s line, Line 12, which stretched far into the city’s southside.

Line 12, also known as the Gold Line, was opened in 2012 and was built when foreign minister Marcelo Ebrard was mayor of Mexico City. While taking to Twitter, Ebrard called the incident a “terrible tragedy”. He said that his “solidarity” is with the victims and their families. “Of course, the causes must be investigated and responsibilities defined. I reiterate I am at the disposal of authorities to help in whatever is necessary,” he added. 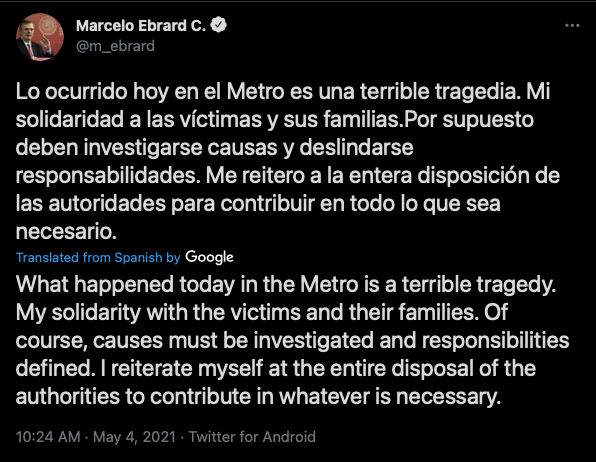 READ | US begins reuniting some families separated at Mexico border
READ | Mexico worries about scorn if another drug lord is released
First Published: 4th May, 2021 13:09 IST
SUBSCRIBE TO US