Mexico: Diver Discovers Mysterious Underwater Fog, Says 'It Is Like Another World'

The underwater fog in Mexico is said to be produced by alternating layers of fresh water and salt water, giving the appearance of an underwater river 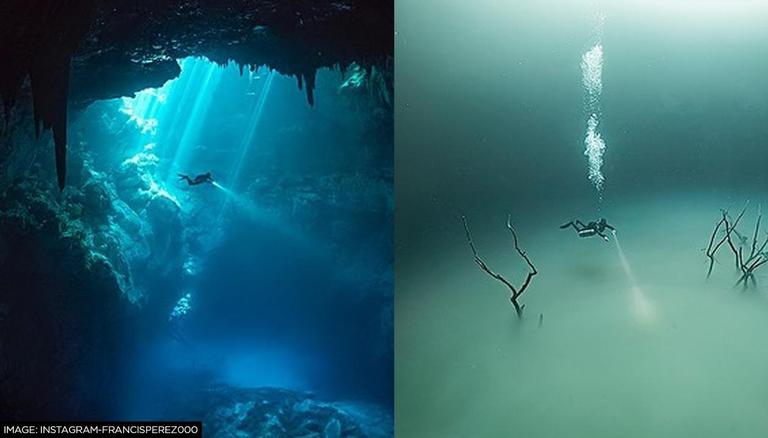 
While exploring the caverns of Mexico, a diver shared stunning images of their dive into a whirling fog. According to the Mirror report, the underwater fog is said to be produced by alternating layers of fresh water and salt water, giving the appearance of an underwater river. Francis Perez, a 52-year-old underwater photographer, plunged into the intriguing "El Pit" cenote, a deep sinkhole in Yucatan, Mexico. In one of the images, it can be seen that the pit's small entrance enabled light to pass through and bounce off the clear water.

Referring to the sea fog, Francis Perez said, “It is like flying over a river. A river inside the water." Francis has captured these amazing locations with a Canon 5D MKiii camera in order to preserve them from encroaching development, Mirror reported. He added, “It is like another world, a mysterious place.”

Francis described cenotes as one of the most spectacular diving sites in which he has ever been to. “At that moment it was an ecosystem new to me,” he noted. Further, he said as the water is so transparent that it seems to be a cloud from the outside if one does not get in, adding that “I think that science has discovered almost 5,000 cenotes and every year they are discovering new cenotes."

Mayan people therefore associated the cenotes to their spiritual beliefs

According to the Mirror report, the ancient Mayans of the Maya civilisation revered cenotes and frequently used them as locations for religious ceremonies. Notably, it is difficult to dive into the cenote since the water is clear for the first 20 metres before getting murky. Due to the cave's 55-metre depth below the surface, experts say only experienced divers should dive in.

Highlighting how humans are exploiting and destroying nature, Francis stated, "It is sad that this wonder of nature is threatened once again by humans that want to build train tracks over these cenotes, a building that will destroy many of them for the sake of shuttling hordes of people from one tourist location to another," the Mirror reported. He claimed that the caverns and cenotes that the rails will travel through are not being taken into consideration. "The train, as planned now, will pass directly over the Sacactun cave system, the second-longest cave in the world."

Furthermore, the diver said that some of the earliest individuals discovered to date in the Western Hemisphere could be found in Sacactun, in addition to priceless artifacts from the illustrious Maya civilisation.