Milk Crate Challenge: What Is It And Why Are Doctors Warning Against This Dangerous Stunt?

The viral Milk Crate Challenge involves milk crates which are to be used as a stairs structure where people try to climb to the top and then walk down. Read on. 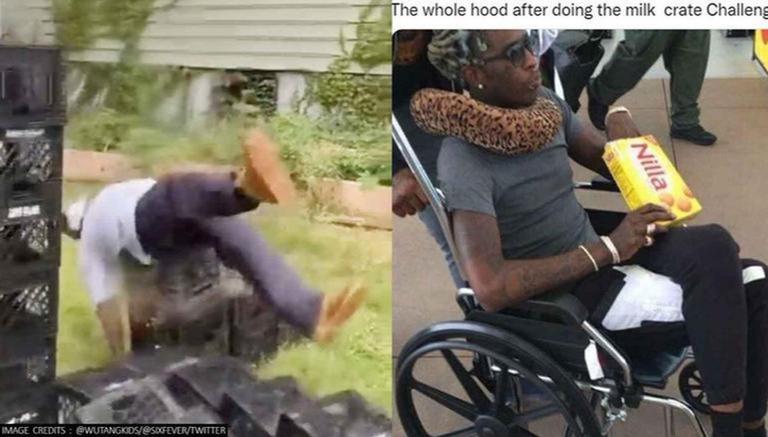 
Internet is known for obsessing over bizarre and crazy things experimented on by people across the world. A recent one among them is the Milk Crate Challenge which has taken the internet by storm. The new social media craze has already gone viral all over the internet. The stunt seems to be a fun activity but it isn't. It has been proven dangerous which can hurt people. Read on to know more about what is the Milk Crate Challenge and what the doctors and experts saying about it.

What is the Milk Crate Challenge?

The viral Milk Crate Challenge involves milk crates which are to be used as a stairs structure where people try to climb to the top and then walk down from the other side. In this stunt, the empty milk crates are arranged in an upside-down staircase pattern in the shape of a pyramid. After that, the person is supposed to climb the staircase from one side and then descend from the other side while balancing the crates. However, as seen in most of the viral videos, people are unable to climb down and end up falling and hurting themselves badly.

Many have already attempted this and posted their videos on social media which is now going viral. The trend was first seen on TikTok and has now spread across Twitter and Instagram. People are sharing the videos with the hashtag #milkcratechallenge.

What are the doctors saying about it?

As witnessed in some of the videos of the challenge, people who are attempting to do it are falling out badly and injuring themselves.

Dr Rajwinder Deu, Professor of Orthopaedic Surgery at John Hopkins University, while talking to USA Today stated that this new stunt is very risky concerning a person's safety as one can injure themselves from head to toes. Meanwhile, instances have surfaced where people ended up falling hard and were seen lying in a pool of blood. More dangerous possibilities of the stunt include broken bones, torn ligaments, serious bleeding, or permanent damages to the body.

Furthermore, Tiktok has been urging people to not try this stunt and has also reportedly removed the videos from its application calling it 'dangerous'.

Check out some of the videos of the challenge:

This is by far the WORST milk crate challenge fall I’ve seen by far 🤣 pic.twitter.com/2FcdyLovL7

WE RECOMMEND
Milk Crate Challenge floods internet: As netizens share hilarious posts, here's what it is