The chief of Myanmar military junta Senior General Min Aung Hlaing on Friday agreed to support the ASEAN in an attempt to restore peace in the country. 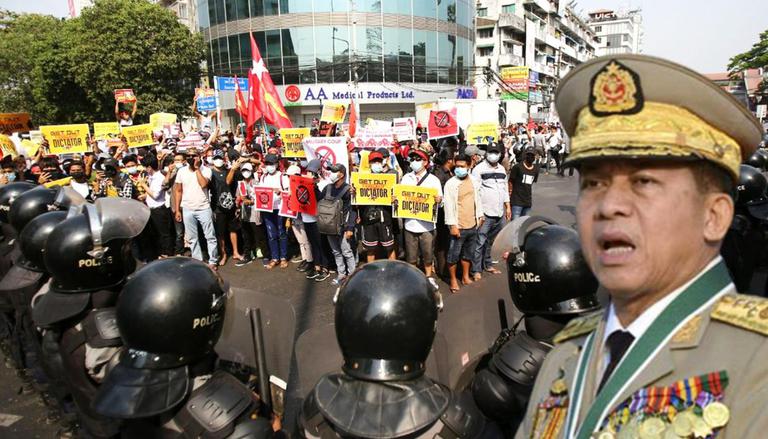 
The chief of Myanmar military junta Senior General Min Aung Hlaing on Friday agreed to support the Association of South-East Asian Nations (ASEAN) in an attempt to restore peace in the country. The pledge was made in a joint statement after meeting Cambodian Prime Minister Hun Sen, who was visiting Myanmar's capital Nay Pyi Taw, Bangkok Post reported. As per the statement, cited by NHK, General Hlaing has expressed his willingness to ensure ASEAN special envoy can meet with all parties involved in the country's political turmoil. The meeting will also include armed ethnic minority groups.

Nevertheless, the statement did not clarify whether the envoy could meet the opposition figures, the deposed government leaders of the National League for Democracy (NLD), especially Aung San Suu Kyi, the former state counsellor. It is to be mentioned that the former leader is now facing numerous criminal charges pressed by the junta after its government was dethroned on February 1, 2021. General Hlaing's statement comes after the rejection of multiple peaceful negotiation requests from ASEAN made throughout 2021. He also asserted that the junta will extend a ceasefire with the ethnic minority militias until the end of the year.

In a bid to revive diplomatic efforts to resolve the Myanmar crisis, the Cambodian PM wished to bring the country back to the ASEAN summits. It is to be noted that PM Hun Sen is the first foreign leader to visit Myanmar since the military coup in February. He arrived in Myanmar's capital on Friday and was greeted by the junta-appointed Foreign Minister Wunna Muang Lwin. As the chairing country of the ASEAN, Cambodia has aimed to make efforts to facilitate negotiations between ASEAN-appointed mediators and the Tatmadaw. General Min Aung Hlaing-led military government is currently barred from attending ASEAN summits due to its "inhumane" crackdown on activists, journalists and anti-coup protestors.

READ | UNESCO condemns killing of journalist in Myanmar, calls for investigation into his death

For a recap, General Hlaing had earlier in April agreed to abide by the consensus reached at a special ASEAN summit in Jakarta. However, he failed to deliver the promises mentioned in the deal, which included calls to end violence in the country and allow the appointment of a special envoy named by the 10-country bloc. ASEAN had then appointed Bruneian diplomat Erywan Yusof, who was rebuffed by the junta when asked to meet NLD leader Suu Kyi. In October, the ASEAN banned Hlaing from the summit, expressing dissatisfaction over his essential ignorance towards the consensus.

It is pertinent to mention that Myanmar has been mired in conflict after the military regime deposed Aung San Suu Kyi government and annulled the November 2020 General Elections. The military also outlawed many opponents. At least 1,300 have been killed and thousands imprisoned since the military took to power. On December 24, as many as 35  civilians, including women and children were killed and their bodies mass burned in the conflict-ridden Kayah State. As per reports, the bodies of the internally displaced citizens were slaughtered and set on fire.