Myanmar: UN Urges For New Year's Ceasefire Between Nation's Military And Its Protesters

The United Nations has urged for a New Year's truce between Myanmar's military and protesters, and asked all involved parties to pursue a peaceful settlement. 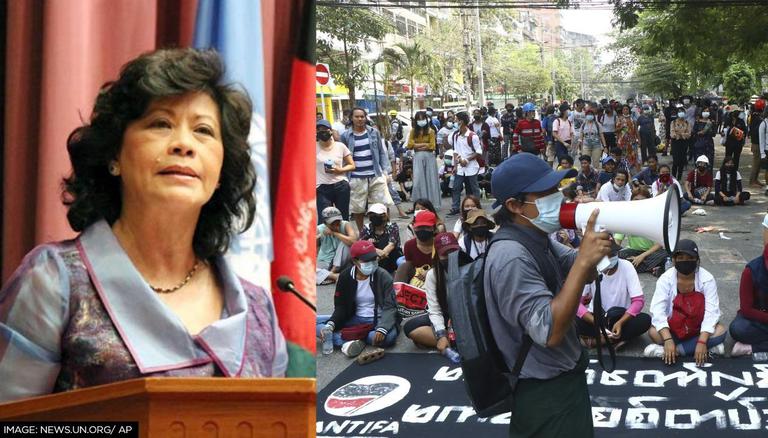 
Amid the ongoing violence in Myanmar, the United Nations has urged for a New Year's truce between the nation's military and its protesters on Monday, asking all involved parties to practice extreme caution and pursue a peaceful settlement to the dispute in the country's best interests. Following weeks of rising violence, the UN Special Envoy for the nation, Noeleen Heyzer, has called for a New Year's ceasefire in Myanmar, as per a UN report.

Heyzer stated in a statement released on Monday that she was worried about the escalating violence in Kayin state and other locations, which has uprooted thousands of citizens, many of whom have left the country for safety and help. "The people of Myanmar have already suffered tremendously and the socio-economic and humanitarian situation has been compounded by the COVID-19 pandemic," said Heyzer.

The UN Special Envoy on #Myanmar 🇲🇲 Noeleen Heyzer has appealed for a New Year’s ceasefire following weeks of escalating violence in the country. On 27 December, she said she is deeply concerned by increased violence in #Kayin state and other areas.https://t.co/foL64dJeLe

According to the UN report, she went on to say that those who have caused misery to their own people must put down their weapons and defend people in times of dire need. "The future of Myanmar’s children counts on this", she added.

All parties should respond in the national interest: Noeleen Heyzer

Since the military took control in February, protests have occurred in Myanmar, in which security forces have retaliated with brutal crackdowns. Further, Heyzer has encouraged all parties to respond in the national interest and to fully comply with their international commitments to protect civilians, guarantee free movement to security, and provide humanitarian aid to those in need. She even highlighted that the Association of Southeast Asian States (ASEAN) has also urged for an end to the violence.

In addition to this, Noeleen Heyzer, who started her job earlier this month, underlined her entire commitment to help Myanmar's people and promote peace as well as stability, while also stating that she will continue to work on organising coordinated international support to achieve these aims.

Meanwhile, according to UN humanitarian affairs chief Martin Griffiths, Myanmar's government must examine the fatal attack against civilians in Kayah state. Griffiths expressed in a statement on Sunday that he has been "horrified" by reports which state at least 35 individuals were killed in the incident on Friday, which included at least one child. The victims were allegedly dragged out of their vehicles, killed, and burned.

Moreover, two humanitarian workers from Save the Children organisation have gone missing as a result of the violence, he added. Their personal vehicle was broken into and set on fire.

"I condemn this grievous incident and all attacks against civilians throughout the country, which are prohibited under international humanitarian law," UN cited Griffiths.