Nepal's Prime Minister Pushpa Kamal Dahal on Thursday met with the grieving families of the people who were killed in the Yeti Airlines plane crash in the resort city of Pokhara. 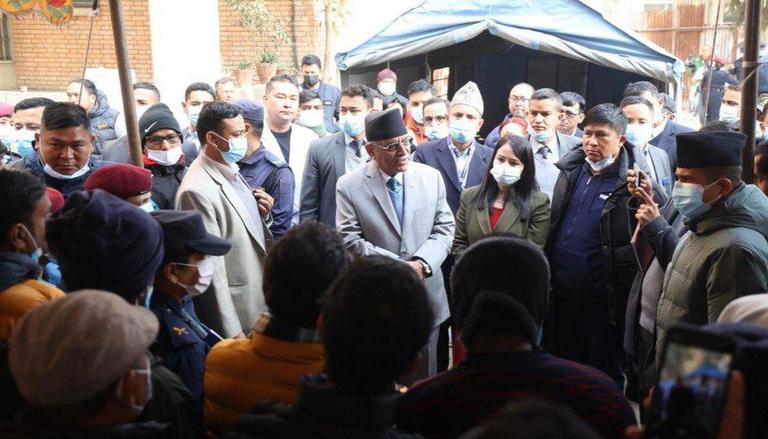 
Nepal's Prime Minister Pushpa Kamal Dahal on Thursday met with the grieving families of the people who were killed in the Yeti Airlines plane crash in the resort city of Pokhara.

Expressing his condolences to the families, the prime minister directed the hospital authorities to speed up the identification of the bodies, make the process scientific and hand over the bodies to the relatives soon, it said.

According to the prime minister’s secretariat, Prime Minister Dahal requested the hospital’s officials to ask for necessary assistance from the government to establish the deceased's identity at the earliest.

The prime minister also inspected the bodies kept for identification.

In one of Nepal's worst domestic crashes, the Yeti Airlines aircraft after taking off from Kathmandu's Tribhuvan International Airport on November 15 crashed on the bank of the Seti River between the old airport and the new airport in Pokhara, minutes before landing.

Fifty-three Nepalese passengers and 15 foreign nationals, including five Indians, and four crew members were on board the Yeti Airlines aircraft when it crashed.

The five Indians, all from Uttar Pradesh, have been identified as Abhisekh Kushwaha, 25, Bishal Sharma, 22, Anil Kumar Rajbhar, 27, Sonu Jaiswal, 35, and Sanjaya Jaiswal.

So far, only 71 dead bodies have been recovered and the search is on for the remaining one person.

According to Nepal’s civil aviation body, 914 people have died in air crashes in the country since the first disaster was recorded in August 1955.

The Yeti Airlines tragedy in Pokhara on Sunday is the 104th crash in Nepali skies and the third biggest in terms of casualties.