Pakistan Not In A Position To Handle More Afghan Refugees: NSA

Amidst an exodus of people from Afghanistan, a top Pakistani official said that his country was not in a position to handle more Afghan refugees. 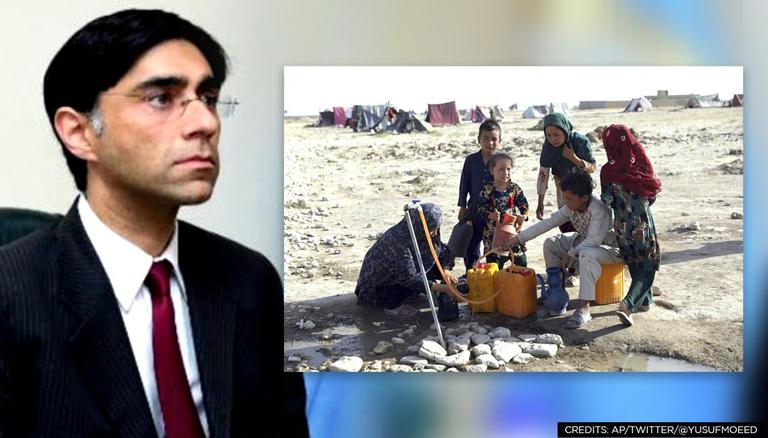 
Amidst an exodus of people from Afghanistan, a top Pakistani official said that his country was not in a position to handle more refugees. Moeed Yusuf, Pakistan’s National Security Advisor recently appeared in an interview wherein he reckoned that Islamabad was willing but not capable of housing more asylum seekers from the war-torn country. His statement came days after the country's Foreign Minister Shah Mahmood Qureshi expressed a similar concern highlighting that the influx would not only affect Pakistan but also Iran.

With the pullout of US and NATO troops nearing its completion, the Taliban has captured more than 85 percent of the central Asian country. Afghan residents, who are already reeling with poverty, inflation, and lawlessness, fear the Taliban’s return could lead to dire consequences. This has triggered a mass exodus of residents, particularly to the bordering country of Pakistan and Iran. Concerned with the same, Yusuf urged help from United Nations High Council for Refugees (UNHCR) to set up camps for refugees on the Afghan-Pak border.

According to the International Organisation for Migration (IOM), the number of people exiting Afghanistan has tripled, with an extra 500,000 departing in the past six months. Iran and Pakistan, both Islamic Republics sharing borders with Afghanistan, account for the most number of migrations. While an estimated three 3 million afghans live in Pakistan, mostly as refugees, another 3.5 million reside in Iran.

Afghans making their way across Asia have also been one of the biggest groups reaching Europe via Turkey. A 2016 deal between the EU and Turkey halted much of the flow of refugees and migrants after a large flow of asylum seekers into Europe. It is imperative to note that Afghans are the third most displaced nation in the world, surpassed only by Syrians and those from the Democratic Republic of Congo.

As of now, the Taliban which was ousted by foreign troops in 2001, has regained control over certain key regions including those located on the country’s borders with Iran, Pakistan, Tajikistan, Uzbekistan. To end and fight and find a way for peace, a team of Afghan delegation is set to hold high-level talks with Taliban negotiators later this week.

READ | Ahead of Afghan-Taliban peace talks, Hamid Karzai asks govt to not 'miss the opportunity'