Russian President Vladimir Putin on New Year's Eve extended his greeting to foreign heads of state and governments for 2022 and hailed Russia-India relations. 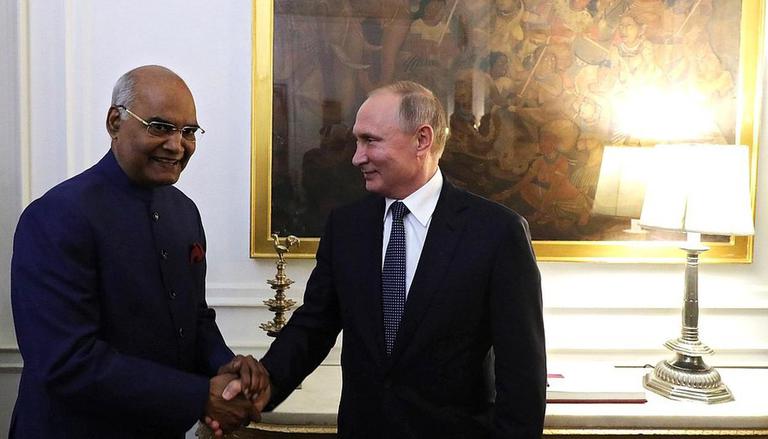 In his message for India, the Russian President noted the high level of Russia-India relations of special privileged strategic partnership, as fully demonstrated by the results of recent talks held in New Delhi, the statement released by Kremlin said on Thursday.

He also expressed hope that in the coming year, the two countries would continue their constructive dialogue both via bilateral ties and within BRICS, the SCO, the G20, the UN and other multilateral organisations, for the benefit of the friendly people of Russia and India, and in the interests of enhancing security and stability in Eurasia and across the globe.

In his message of greetings to President of the People's Republic of China Xi Jinping on the occasion of the New Year 2022 and the upcoming Spring Festival, Vladimir Putin recalled that China and Russia continued to make exceedingly productive interactions despite pandemic-related challenges.

Lastly, in a brief message, Putin also wished US President Joe Biden and several other dignitaries of the United States, international organisations like UN Secretary-General Antonio Guterres, IMF Managing Director Kristalina Georgieva, President of the Olympics committee Thomas Bach, Members of the Committee and many more.

It is pertinent to mention that India and Russia have shared a strong bilateral relationship in the field of military and trade. The diplomatic ties have further bolstered under the leadership of PM Modi and President Putin, with both leaders aiming to reach $30 billion bilateral trade by 2025.

Russia has publicly expressed support in favour of India gaining a permanent seat on the UN Security Council. The Indo-Russia Intergovernmental Commission (IRIGC) formed between both nations is one of the most comprehensive forums that conducts mutual affairs and collaborates closely on matters of international interests.

India is the second-largest market for the Russian Defence Industry. Approximately 68% of Indian military hardware imports came from Russia in 2017. Recently, India purchased the S-400 air defence system from Russia, five of which were brought to India in December.

India too pushed ahead with the deal despite the threat of sanctions from the US. At the same time, Russian Foreign Minister Sergei Lavrov accused the US of undermining India-Russia relations. "We witness the times on the part of United States to undermine this cooperation and to make India obey the American order, to follow the American vision of how this region should be developed," FM Lavrov had told ANI.

India also held the first-ever 2+2 dialogue in the Indian capital on December 6. In the meeting, both the countries decided to strengthen bilateral and economic cooperation and boost the Vladivostok-Chennai energy corridor.