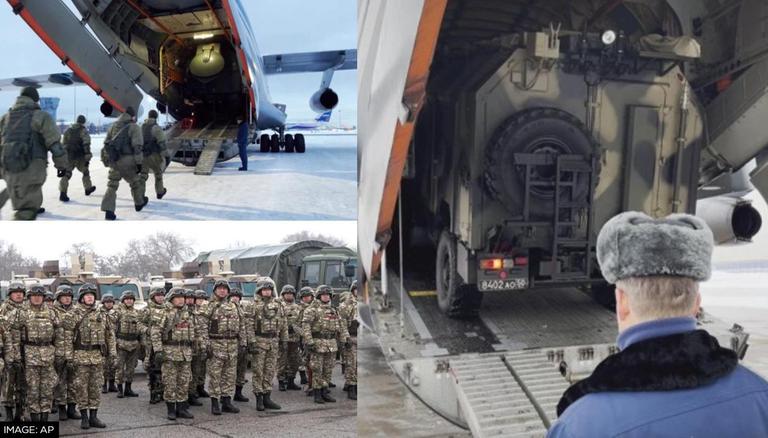 
Russia has dispatched as many as 18 aircraft as of Saturday to fly back the Russian peacekeepers of the Collective Security Treaty Organization (CSTO) mission and the military equipment from Kazakhstan back to Moscow and Ivanovo region. Kazakhstan had sought assistance from the Russia-dominated security alliance as the civilian unrest and riots unleashed across the ex-Soviet nation, and uncertainties loomed over the faith on a section of law enforcement and military forces whom Kazakhstan’s president accused of attempting to the coup and emboldening the terror elements. 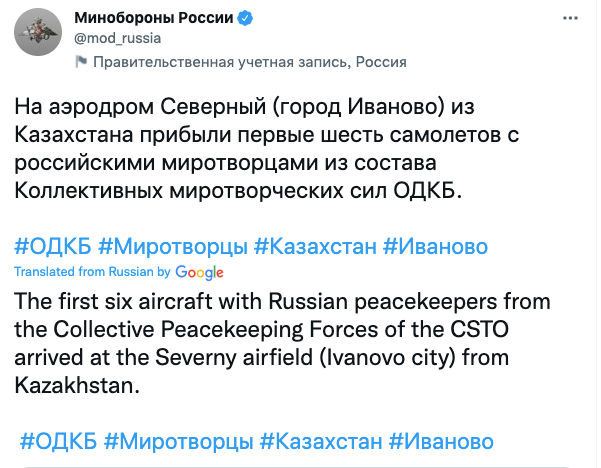 Moscow had dispatched planeloads of Russian elite airborne units into Kazakhstan to maintain law and order, and at least 2,500 CSTO peacekeepers were deployed across Kazakhstan, according to a statement by Kazakh Deputy Foreign Minister Shukhrat Nuryshev. Collective Security Treaty Organization was formed in the 1990s shortly after the collapse of the Soviet Union and includes the military alliance between Russia, Armenia, Belarus, Kazakhstan, Kyrgyzstan, and Tajikistan. 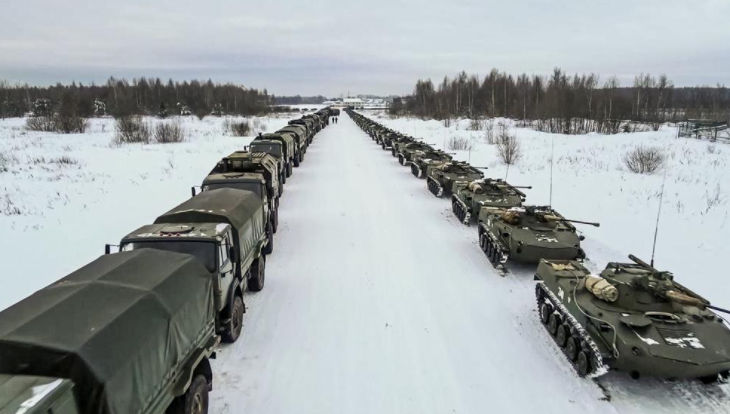 In this image taken from footage provided by the RU-RTR Russian television, Military vehicles of Russian peacekeepers parked waiting to be uploaded on Russian military planes at an airfield in Russia. [Credit: AP]

READ | US says 'drumbeat of war sounding loud' after talks with Russia on Ukraine crisis: Report

The alliance indulges at the time of the regional security crises such as during the Afghanistan drawdown migrant spillover. Russia, under the CSTO, has over 7,000 troops stationed along the border with Tajikistan. Kazakh President Kassym-Jomart Tokayev in his televised remarks appealed with the alliance for military help as he accused the “international terrorist groups" from the Mideast and Central Asia of causing internal aggression in his country.

READ | NATO chief says talks on missile limits with Russia should not be held in public: Report 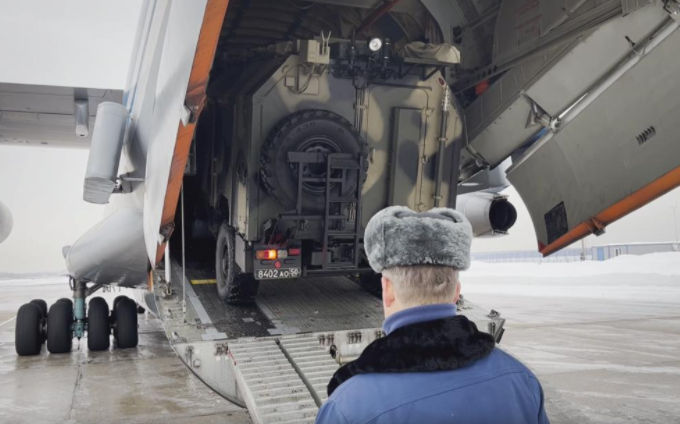 In this photo taken from video released by the Russian Defense Ministry Press Service, Russian peacekeepers board a vehicle on a Russian military plane at an airfield outside Moscow, in Russia, to fly to Kazakhstan. [Credit: AP]

Peacekeeping contingents of Armenia, Belarus, and Tajikistan also pull out

Ministry of Defense of the Russian Federation on January 15 informed that the units of Russian peacekeepers from the collective peacekeeping forces of the [CSTO] in Kazakhstan loaded their military equipment into the MTA Il-76 and An-124 aircraft and took off from Alma-Ata. “Russian Aerospace Forces will deliver personnel and equipment of airborne units that have completed tasks as part of the collective peacekeeping forces of the CSTO to airfields in the Ivanovo and Moscow regions,” the Russian defense ministry said. 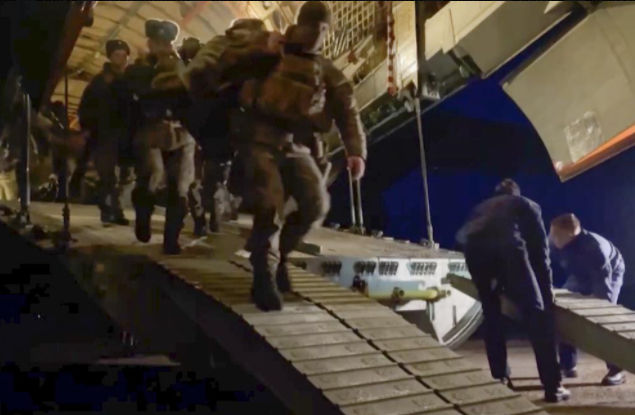 In this image taken from footage provided by the RU-RTR Russian television, Russian peacekeepers exit a Russian military plane in an airport in Kazakhstan. [Credit: AP]

It further informed that all the Russian military equipment will return to permanent deployment in Russia as the forces completed the tasks of protection of socially significant facilities in the Republic of Kazakhstan. At least four Il-76md planes of the military transport aviation of the Russian Air Force flew out the Russian troops from the airfield Almaty to the airfield Severny (Ivanovo). After loading the equipment, the personnel from peacekeeping contingents of Armenia, Belarus, and Tajikistan also returned to their homeland on Il-76 military transport aircraft of the Russian Aerospace Forces, Moscow said.

WE RECOMMEND
Russia: Scientists are studying effects of interplanetary isolation on humans, here's why
Russia urges US to 'abandon aggressive rhetoric of expansion' ahead of NATO talks
Russia refutes claims of Kanye West meeting President Putin; 'Not so deeply formulated'
Russia sees sharp rise in virus cases amid new surge fears
US says 'drumbeat of war sounding loud' after talks with Russia on Ukraine crisis: Report