Russia's prosecutor's office announced that it will be designating Navalny’s Anti-Corruption Foundation and regional political headquarters as extremist groups.


The Moscow prosecutor’s office has now announced that it will be designating Russian opposition leader Alexei Navalny’s Anti-Corruption Foundation and his regional political headquarters as "extremist groups". As per a statement released by a law enforcement body, it was seeking the designation which is usually reserved for organisations such as al-Qaida or Aum Shinrikyo as it believed that Navalny’s organisations were “creating conditions for changing the foundations of the constitutional order, including through the scenario of a 'coloured revolution'". If the decision is approved it will break off Navalny from his supporters and financial donors.

According to reports by The Guardian, the prosecutor’s office said that it had applied for a court ruling to recognise both organisations as extremist. This would allow the government to fine and imprison members of the pro-Navalny groups, only if this is granted and upheld on appeal. Deeming the activities by Navalny’s organisation as “undesirable”. A statement issued by the prosecutor’s office also claimed that Navalny’s organisation was acting like international bodies in Russia whose activities have been termed as "undesirable". The statement terms Navalny’s movement a front for western interests.

Leonid Volkov, a Navalny ally, said that the evening press release was a “test of public opinion”. Also, he asked Navalny supporters to make their voices heard. The head of the organisation, Ivan Zhdanov, in a statement wrote, "The Kremlin has just demanded that anyone who does not agree with them to be called an extremist … It’s absolutely clear that the Kremlin’s new attack is connected with the planned protest and the elections in September". He added, "They’ve decided to steamroll the Anti-Corruption Foundation and the headquarters. We won’t surrender". 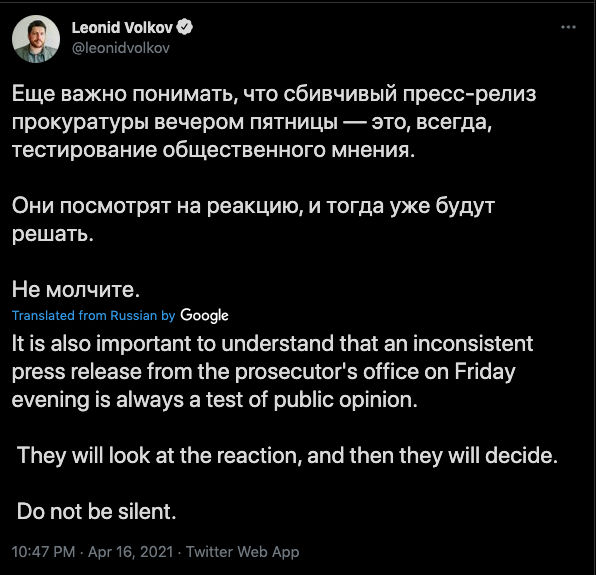 In another development worth mentioning, Navalny, who has been on a hunger strike since March 31 has said that the police threatens to force-feed him. His allies have said that he has lost weight due to a hunger strike. They have been demanding a health check-up of Navalny from a civil doctor from outside.

Describing his state after more than two weeks of a hunger strike, Navalny said his head was “spinning a lot,” but that he was “still walking. Earlier this week, his wife Yulia, who visited him in prison earlier this week, said the politician was “cheerful” but had trouble talking and lost a lot of weight. His allies on April 1 had blamed the prison authorities for depriving him of sleep but the charge was denied by the guards in the prison.  His allies have demanded that a doctor from outside should conduct a check-up of Navalny.