Harsh Vardhan Shringla met the special envoy of the EU for Afghanistan, Tomas Niklasson, and discussed the current situation in the war-ravaged nation. 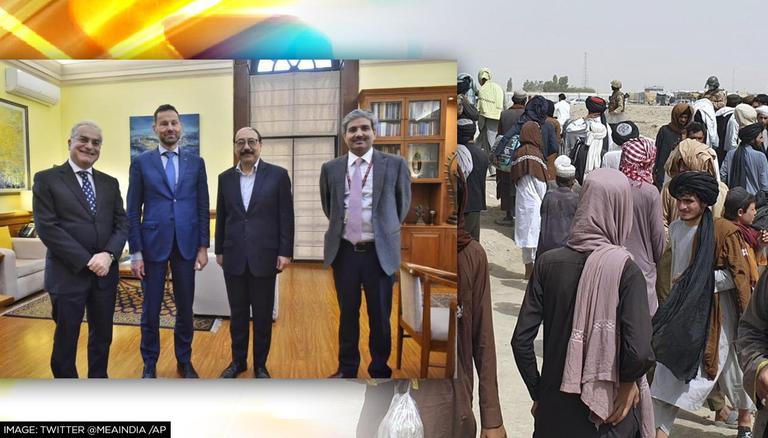 
Foreign Secretary Harsh Vardhan Shringla on Wednesday met the special envoy of the EU for Afghanistan, Tomas Niklasson, and discussed the current situation in the war-ravaged nation. Ministry of External Affairs Spokesperson Arindam Bagchi informed that both the diplomats have agreed to continue the ongoing coordination between India and the European Union (EU) on Afghanistan.

Exchanged views on the current situation in Afghanistan. Agreed to continue the ongoing coordination between India & EU on Afghanistan. pic.twitter.com/GgrpnElaUa

The meeting between Indian and European officials comes at a time when Afghanistan is facing a severe humanitarian crisis. Suspension of foreign aid, the freezing of Afghan government assets and international sanctions on the Taliban have plunged the war-torn country, which is already suffering high poverty levels, into a full-blown economic crisis. According to the UN, around 22.8 million people are facing acute food insecurity and hunger, while the Wood Food Programme (WFP) has estimated that at least a million children are already suffering acute malnutrition.

READ | Taliban has killed or enforced disappearance of over 100 former Afghan officials: Report

Afghanistan is facing a severe cash shortage, which has paralysed banks and companies, skyrocketed food and gasoline costs and sparked a horrific famine crisis. The World Health Organization (WHO) warned earlier this month that 3.2 million children in Afghanistan are expected to suffer from acute malnutrition by the end of the year, with one million of them at risk of dying as temperatures drop. No humanitarian situation can be solved solely by humanitarian assistance, according to Abdallah Al Dardari, the UNDP's resident representative in Afghanistan. He added that If we lose these systems in the coming months, it will be difficult to reconstruct them in time to meet the country's basic demands.

Meanwhile, in an effort to alleviate the aforementioned crisis, the Taliban have expanded its diplomatic actions, including reaching out to European Union countries for financial help. Last week, delegates from the Taliban and the EU even met in Doha to discuss the current situation in Afghanistan. According to Tolo News, Taliban and European Union delegations discussed Afghanistan's political and economic challenges, as well as humanitarian help.

According to a statement, “The delegations discussed topics related to counter-terrorism, enhancing human rights and humanitarian aid. The two sides stressed on the importance of having humanitarian aid reach its beneficiaries, especially with the winter season approaching."