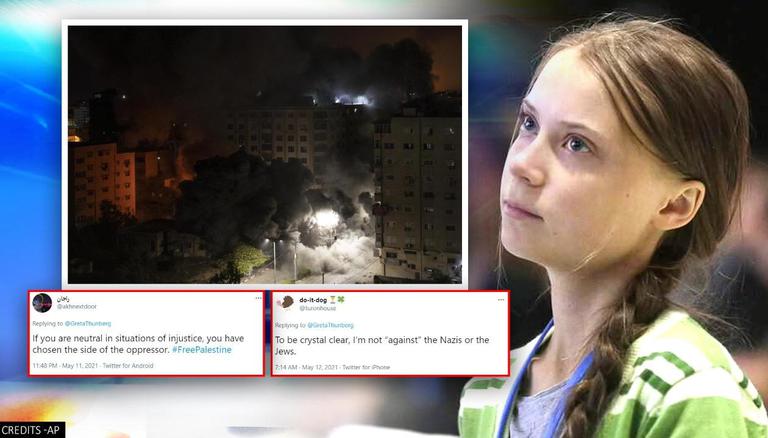 
Teenage climate activist Greta Thunberg, who rose to fame by lashing out at world leaders for their inaction against the environmental crisis, faced backlash for her “neutral” stance in the ongoing Israel-Palestine conflict. Taking to Twitter, the 18-year-old on May 11 said that to be “crystal clear” she is neither “against” Israel or Palestine but denounced “any form of violence or oppression.” However, her followers lambasted her for promoting the controversial stance especially when the Israel-Palestine tensions has cost over 26 lives. The fuming netizens termed Thunberg “dumb” and even pointed out the quote, “If you are neutral in situations of injustice, you have chosen the side of the oppressor” by Bishop Desmond Tutu.

To be crystal clear: I am not “against” Israel or Palestine. Needless to say I’m against any form of violence or oppression from anyone or any part. And again - it is devastating to follow the developments in Israel and Palestine.

From saying she needs to “start going to school” to asking the climate activist to “leave Twitter,” the angry netizens who are devastated by the situation in the Middle East criticised Greta Thunberg. One of the disappointed internet users said “shame on you.” Her remarks on Tuesday came as Israel unleashed fresh airstrikes on Gaza on the same day and hit a pair of high-rise buildings believed to be housing militants. Meanwhile, Hamas and other armed groups bombarded southern Israel with hundreds of rockets. The Israel-Palestine conflict escalated relentlessly throughout the past weeks.

READ | Will ensure you're in the clear: 'Panicking' Disha Ravi's toolkit text to Greta Thunberg

As per reports, since sundown May 10, at least 26 Palestinians including around nine children and women were killed in Gaza, mostly by airstrikes. The Israeli military said that at least 16 of the dead were all militants. In a further signal of escalating tensions, Israel signalled it is widening its military campaign. Amid such a poor situation, Greta Thunberg’s phrasing of the comment also triggered netizens to compare her take with other such situations.

For instance, one internet user wrote, “To be crystal clear: I am not “against” burning fossil fuels or green energy. Needless to say I’m against any form of damage to the environment, from anyone or any part.”

If you are neutral in situations of injustice, you have chosen the side of the oppressor. #FreePalestine

To be crystal clear, I’m not “against” the Nazis or the Jews.

To be crystal clear: I am not “against” burning fossil fuels or green energy. Needless to say I’m against any form of damage to the environment, from anyone or any part.

Gotta put it in their language so they get how stoopid it sounds. https://t.co/HC6hiKb9Uy

Sorry to say but, this is the time to go to school, @GretaThunberg.

If you're still neutral, then you're part of illegal occupation and oppression. By that mean, you're also endorsing the killing of innocent Palestinians.

Shame on you. Stop doing drama of speaking for justice.

This is worse than the original retweet.

Resistance is a basic human right. If you care about the planet you should also care for it's inhabitants who are in danger.

Look who's taking sides with the oppressor by staying neutral pic.twitter.com/FIhVYoHHyi

I understand you weren’t alive in the last 70 years, but if you don’t fully understand the matter and just wanted to express your neutrality about this injustice, it’s better to not have spoken about it.

Extremely disappointed to hear this from you. I always thought you were quite bright, sad that you don't see the obvious injustice being carried out against Palestine.