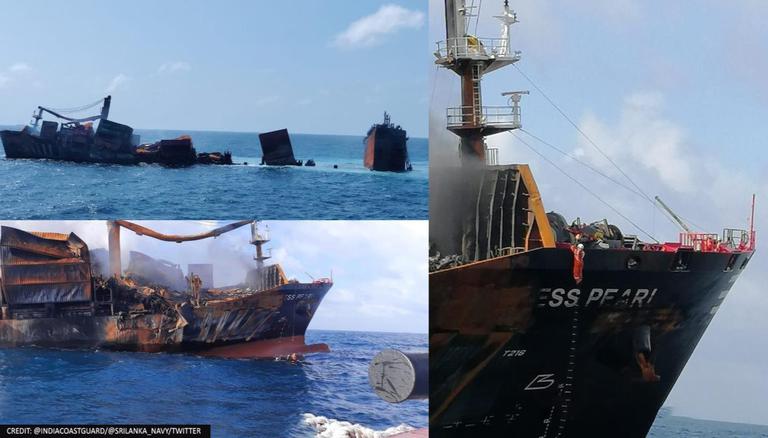 
Having foreseen the ‘inevitable’ ecological crisis,  Sri Lankan authorities Thursday said that they are now preparing for the ‘worst-case scenario’ of the oil spill from the burnt-out and sunken Singapore registered vessel at Colombo's main harbour. Now that the vessel has sunk, its stern fully submerged underneath after the Salvagers failed to tow it in to the deep waters due to powerful monsoon winds, Sri Lankan authorities are worrying over the ship's oil leaks that may spill farther into the Indian Ocean. Indian Coast Guard, acting in a well and timely manner, deployed three vessels including the PCV Samudra Prahari on stand-by as the Salvager teams assessed the situation.

Fire on X-Press Pearl: #Vessel’s aft sits on seabed
A joint operation in coordinating with local authorities to mitigate the impact of the possible environmental damage due to the fire on #MVXPressPearl continues today. Read more at;https://t.co/lC2kjMbeNT pic.twitter.com/VIYiRtHoaA

The fire-damaged MV X-Press Pearl was ablaze for the twelfth day and had hundreds of tons of oil and 25 tons of nitric acid and other chemicals in its 1,486 containers. The ship was mainly traversing with the raw materials for cosmetics from Hazira, Gujarat India to Colombo Port on May 20. The 325 metric tonnes of fuel in its tanks is now feared to spill into the worst marine ecological disasters of the Southeast Asian nation. Marine Environment Pollution Authority (MEPA) as a precautionary measure suggested a fishing ban along 80 kilometers (50 miles) off the coast. "With the available information so far, this can be described as the worst disaster,” a chairperson had said. The last visual of the ship was captured by Sri Lanka Air Force before it plunged into the waters.

“The ship's aft portion is now touching bottom at a depth of 21 meters (70ft)," while the forward area remains afloat with smoke coming out of two cargo holds,” the ship’s manufacturing company said in a statement. The Marine Environment Protection Authority readied oil dispersants, booms and skimmers incase of oil leak from the sunk MV X-Press Pearl tanks.

Fishing in South India may be impacted in few weeks

Navy spokesman Indika de Silva told reporters on the ground that there hasn’t been a spill yet, but the arrangements were being made to tackle the worst-case scenario. Thick smoke was seen arising from onboard as the vessel sank and it has been plunging in deeper. The vessel’s superstructure and the forward portion were still visible on Wednesday. A search operation will be conducted to locate the Voyage Data Recorder (VDR) of the vessel to determine the conversation between the captain and the crew as a  criminal investigation is underway. Due to the unprecedented marine environment disaster, fishing activity is expected to suffer in the western Sri Lankan coasts and South India.

Situation Update: Latest pictures of the "X-PRESS PEARL" vessel. Footage was captured by the SLAF Bell 212 a short while ago (02 June 2021).#MVXPressPearl pic.twitter.com/KsmlOtVfPn