Sri Lankan plaque in AG's office in Colombo saw Mandarin Chinese text replacing Tamil. The incident has led to a fear of Tamil being omitted in other places too 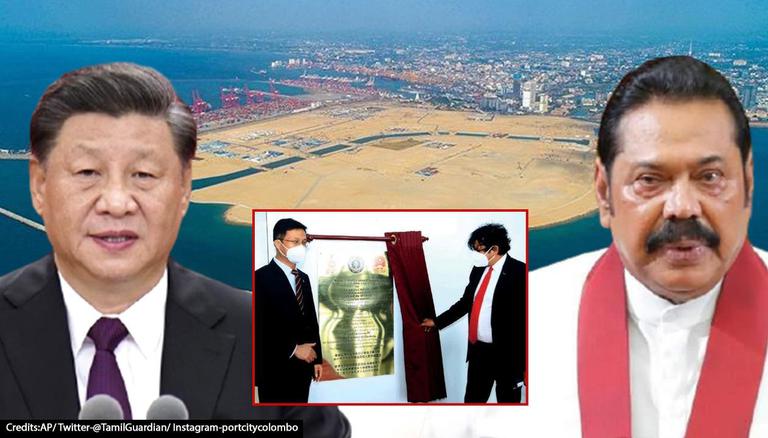 
Sri Lanka is currently caught in the middle of a major language controversy as Mandarin replaces Tamil on signages in government facilities. Desperate to increase its footprints in the Indian Ocean region and particularly with other countries neighbouring India, it has now been learned that signboards have cropped up in Mandarin Chinese in various parts of the island nation

What is alarming is Sri Lanka's move to replace the Tamil language in signboards and instead use Mandarin Chinese text on plaques. This has unsurprisingly flared up a widespread protest on social media in Sri Lanka.

Concerns over the elevation of Mandarin Chinese as one of the official languages of Sri Lanka has now emerged after China gifted a smart library to the Attorney General's (AG) Department where it was observed that the signage was engraved in Sinhalese, English and amusingly enough in Mandarin Chinese, thereby evoking widespread criticism over the omission of Tamil. Notably, the Chinese envoy to Sri Lanka was also present at the inauguration event.

However, after sharp criticism from locals on social media platforms, the AG office has reportedly removed the Mandarin Chinese plaque but refused to comment or respond to allegations and queries put forth by national media.

Sri Lanka's Opposition leader and parliamentarian Mano Ganesan in his tweet blamed the Chinese for "violating language law" and noted that the failure to include Tamil was in fact a violation of the official language act.

Plaque of #Chinese gifted Smart Library at AG's Dept that "inadvertently" failed to contain #Tamil script violating Official languages act is being replaced. Commendable..! But who's 'misadventure" was it? #AG, #ChinainSL or #GoSL? #lka pic.twitter.com/ebnPGGWPDr

Slamming the envoy for ignoring etiquette and the law of the land Ganesan explained that the Tamil people came to China all the way back in the 5th century, taught arts to the Chinese and were all appreciated for their contribution. 'But it appears the Chinese have learnt to ignore Tamil from our government since GoSL's (Government of Sri Lanka) usage of the classical language is no better.

This was the second instance of the Mandarin Chinese texts spotted in signboards. Last week, Batticaloa MP Shanakiyan Rasamanickam shared on Twitter an image of a signboard of the ‘Central Park’ coming up at the China-backed Colombo Port City, with text in Sinhala, English and Mandarin, and said: “Tamil text is missing, that’s alright! Soon Sinhala will be missing too. Hope Sri Lankans wake up at least then.”

Looks like the cat is really out of the bag...
The Chinese gov decides what goes on nameboards in SL...
This really indicates how little control the SLGov has over the situation. And to think that the port city bill hasnt even been passed yet... https://t.co/VlhZuU4Z1W pic.twitter.com/y3A4WZtOE7

Rasamanickam launched a scathing attack on the growing Chinese influence in the country and also vehemently opposed the recently passed law governing Port City and said the country had become “Chi-Lanka”.

Colombo Port City to be a new Chinese town in Sri Lanka?

The Bill empowers the President of Sri Lanka to establish a commission to independently govern the Special Economic Zone (SEZ). The businesses operating in the area can trade in their own currencies in the SEZ region.

The bill has created outrage because it empowers China to act independently on Sri Lankan soil outside of the country’s laws and provide foreign investors unbridled control on the resources while bypassing local laws.

The port city which is built by China Communications Construction Co. plans to transform the city into a "modern financial district", and has so far proposed to build shopping malls, a beach-view promenade, a hospital, 21,000 apartments, and homes, among other infrastructure. The bill will empower the Chinese to make inroads into the governance of the city, which locals fear is already inevitable.

The $1.4 billion Port City is slated to be the single largest private sector undertaking in Sri Lanka amid concerns over China's growing footprint in the country through contentious infrastructure projects. Notably, Sri Lanka has already leased its Hambantota port to China for a period of 99 years, a move that has rightly caused an uproar both in India and Sri Lanka. This new Chinese-controlled Colombo Port City will now slash the distance to India's Kanyakumari to under 300 kms.