Taking a jibe at the United States shortly after the gruesome Texas school shooting, China said that Washington as a "human rights defender" was a “big joke”. 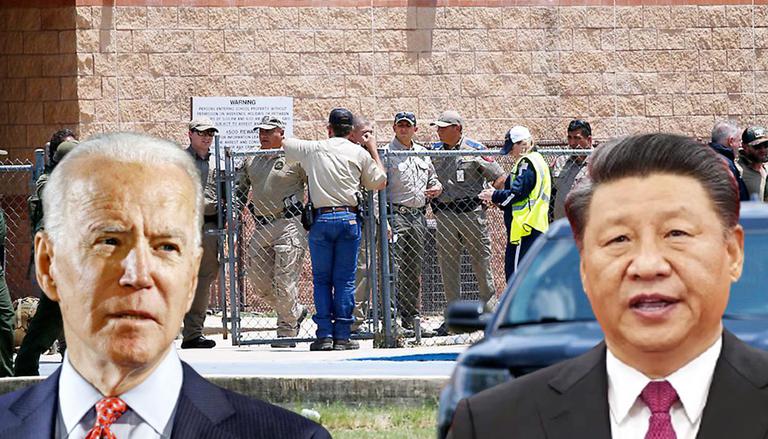 
Taking a jibe at the United States shortly after the gruesome Texas school shooting, China said calling Washington a "human rights defender" was a “big joke”. Chinese Communist Party’s mouthpiece and the country’s state-affiliated media, Global Times responded to the incident in the United States where an 18-year-old gunman went on a killing spree at an elementary school and killed at least 19 children along with two other adults.

On the official social media account, the CCP mouthpiece slammed US saying, “A country that arbitrarily uses military forces on other countries, must also be rife with violence within itself. The US as "human rights defender" is a big joke.”

The latest shooting incident in Texas, just a few days after the racially-motivated shooting attack in a grocery store in Buffalo, New York, has sent shockwaves across the country while also reigniting the longstanding debate over restrictions on firearms. Global Times responded to a video showing the US national flag at the White House being lowered to half-mast following US President Joe Biden’s order as a “mark of respect for the victims of the senseless acts of violence” in Texas.

On Tuesday, a teenage gunman killed at least 19 young children and two other adults at the Robb Elementary School in Uvalde, Texas triggering the Democratic administration to denounce the gun lobby in the country and calling for more action against the same. The attack in Uvalde is believed to be the deadliest US school shooting in several years and the latest tragic incident in a spree of bloody gun violence across the United States.

"It's time to turn this pain into action for every parent, for every citizen of this country…It's time for those who obstruct or delay or block commonsense gun laws -- we need to let you know that we will not forget," Biden said.

Teen gunman dead after killing 19; shot his grandmother at home

In a news conference, Texas Governor Greg Abbott named the suspect Salvador Ramos, who was an 18-year-old local resident and an American citizen. Abbott also said that the teen “shot and killed, horrifically and incomprehensibly”. In another shocking development of the case, Texas Department and Public Safety officials told CNN that the gunman is believed to have shot his grandmother before heading to Robb Elementary School around noon.

In front of the school, as per the outlet, he abandoned his vehicle and entered with a handgun and a rifle while also wearing body armour. It has also been found that he posted images of the guns on his Instagram account, which Meta later said was removed from the website.