Mike Jack ate the whole piece of banana within 37.782 seconds and surprisingly he did not even use his hands. He made several other records. 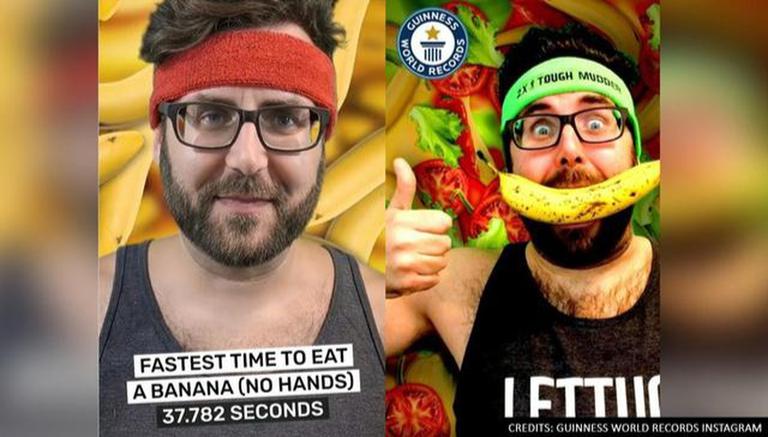 As the video proceeds, Jack can be seen performing other food challenges such as eating the spicy chilli Bhut Jolokia and drinking one litre of tomato sauce within a minute. He then went on to attempt the record for the most almonds eaten in a minute and achieved it by chomping down on 32 almonds. Mike is a vegan and used to upload videos on YouTube based on vegan items. When asked the reason for being a vegan, the record-breaker said because he treats all animals equally. "I’m vegan because I see all animals as being equal. A lot of people like dogs and cats but they don’t really have that connection with cows and pigs. I’ve gone to farm sanctuaries before and I’ve met the nicest pigs, the cutest cows, some cute turkeys. We bonded, we’re like pals. I don’t want to eat my pals!" said the UK based YouTuber.

'Maybe fastest food competition will be in Olympics one day!'

According to Jack, his last wish would be to add the fastest food eating challenge in the Olympics. "I like to raise awareness for competitive eating as a sport – maybe it will be in the Olympics one day! Also, it’s super silly and fashionable." Meanwhile, the video which was uploaded on Friday has garnered thousands of views on Instagram and the count is still going on. Netizens were also in a state of shock after watching a man-eating and drinking the food items so fast. While some users gave a dare to the record-breaker to visit India and make such records. "Just come to India and all of these records are gonna break," wrote the user.

Meet the man who drinks two litres of soda in 18.45 seconds

Eric ‘Badlands’ Booker, a competitive eater, recently created a world record by drinking two litres of soda in 18.45 seconds. Although the avid soda drinker is a huge hit on social media, he always dreamt of holding a Guinness title. His years-long ambition turned into reality after he drank a two-litre bottle of sugar-free cola for his record attempt in Selden, New York.
Guinness posted a video of the attempt on YouTube in which he is seen pouring the bottle into a measuring cup to get an accurate measurement of the volume of the beverage and for easier drinkability. The clip begins with Eric introducing himself, then gulping down the black coloured drink in seconds and ending it with a burp.