Ukraine's Euro 2020 Kit Causes Outrage In Russia, Here's All You Need To Know

Ukraine’s new kit for Euro 2020 for its players triggered outrage in Russia as the jersey is emblazoned with a map of the country’s borders including Crimea. 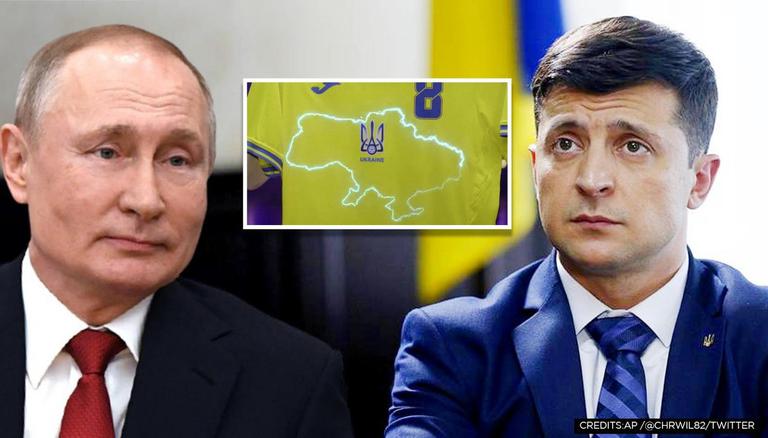 
Ukraine’s new kit for Euro 2020 for its players triggered outrage in Russia as the jersey is emblazoned with a map of the country’s borders including Russia-annexed Crimea and a slogan “Glory to Ukraine!” The head of the Ukrainian Football Association, Andriy Pavelko unveiled the Euro 2020 kit on the Facebook page on June 6 just days before the European Championship is scheduled to start. According to the images and videos on social media, the yellow-coloured shirt shows the contours of Ukraine in white including Crimea along with other pro-Russian and separatist-controlled regions of Donetsk and Lugansk.

Further, the slogan on the back of the shirt reads “Glory to Ukraine!” which is also a patriotic chant used by demonstrators in the country who led to ousting of the pro-Moscow president Viktor Yanukovych in 2014. The inside slogan declares “Glory to the heroes!” Addressing the map of Ukraine on the shirt, Pavelko had said on Facebook, “We believe that the silhouette of Ukraine will add strength to the players because they will fight for all Ukraine. And all Ukraine, from Sevastopol and Simferopol to Kyiv, from Donetsk and Lugansk to Uzhgorod will support them in every match.”

Why Russia is angry with the Ukraine kit?

Ukraine’s Euro 2020 kit has severely angered Russia. As per BBC report, Russian Foreign Ministry spokesperson Maria Zakharova lashed out at the authorities for choosing the design and said that the football team had “attached Ukraine's territory to Russia's Crimea", creating the "illusion of the impossible.” reportedly, she also labelled the slogan as nationalistic and added that it echoed a Nazi rallying cry. Additionally, Russian MP Dmitry Svishchev called the Ukrainian shirt “totally inappropriate” and called on Euro 2020 organisers UEFA to take stringent action.

READ | EURO 2020: Shevchenko aims to break through as Ukraine coach

Basically, Russia had annexed Crimea from Ukraine back in 2014. Since then, Moscow has considered the peninsula part of Russia. However, internationally recognised as part of Ukraine. The bilateral relations between Moscow and Kyiv have severely deteriorated after the annexation of Crimea. It also marked the start of a Russian-backed rebellion in eastern Ukraine in 2014. Additionally, in the years that followed as Russia’s control on Crimea enhanced, reportedly Donetsk and Lugansk are controlled by fighters seen as Russian proxy forces.

All regions are included in Ukrainian Euro 2020 kit. Despite Russia’s criticism, the US embassy in Kyiv supported the jersey and posted it on Twitter. Ukraine is set to play their opening Euro 2020 match against the Netherlands on June 13 and none of its matches is currently scheduled to play in Russia or against the Russian national side.

WE RECOMMEND
Why is European Championship held in 2021 called Euro 2020 and not Euro 2021?
Page and Davies confident ahead of Euro 2020 despite Albania draw
Russia chafes at Ukrainian team's shirt for Euro 2020
Covid scare for Spain 5 days before Euro 2020 as Sergio Busquets tests positive
Wenger - World champs France are 'super-favourites' for Euro 2020