UN Chief Urges To Abandon Nuclear Weapons; 'Let’s Eliminate Them Before They Eliminate Us'

UN Chief Antonio Guterres has urged the global community to give up nuclear weapons once and for all at the First Meeting of States Parties to the Treaty. 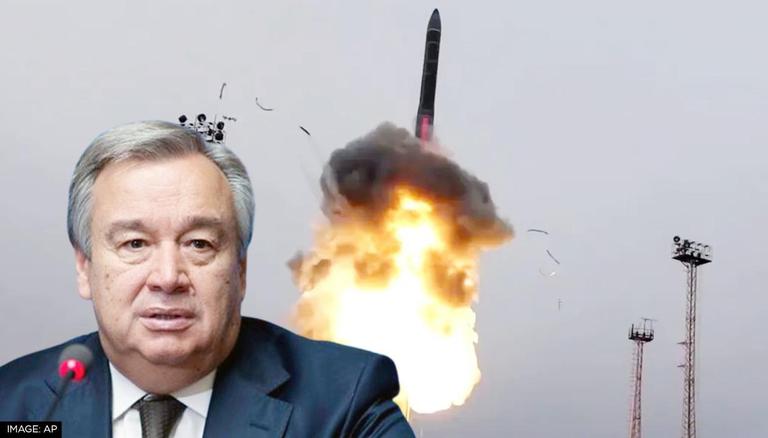 
The Secretary-General of the United Nations, Antonio Guterres has urged the global community to give up nuclear weapons once and for all, further stressing that "a deadly reminder of countries' inability to solve problems through dialogue and collaboration". On Tuesday, at the First Meeting of States Parties to the Treaty on the 'Prohibition of Nuclear Weapons', he delivered these statements. As per an ANI report, this significant event, which started on June 21, will continue there through June 23.

In a video speech, the UN chief said that these lethal weapons give "false promises of security and deterrence" while ensuring only "destruction, death, and endless brinksmanship." "Let’s eliminate these weapons before they eliminate us,” he added.

The nuclear weapons wielded by a handful of countries cannot jeopardize life on our planet.

The Treaty on the Prohibition of Nuclear Weapons is a major step towards a world without nuclear weapons.

Let’s eliminate these weapons before they eliminate us. https://t.co/DciZ3CQNC8

Furthermore, the atomic bombing of the two important Japanese towns during World War II was referred to by Guterres as the "terrifying lessons" of Hiroshima and Nagasaki which are presently "fading from memory," UN News reported. Voicing alarm, the UN chief said that the previously inconceivable threat of nuclear confrontation is now again within the range of possibility, as over 13,000 nuclear warheads are still housed in various locations throughout the world.

According to UN News, UN Secretary-General noted, “In a world rife with geopolitical tensions and mistrust, this is a recipe for annihilation.” He continued by saying, “We cannot allow the nuclear weapons wielded by a handful of States to jeopardize all life on our planet. We must stop knocking at doomsday’s door”.

Guterres also stated that the Treaty on the Prohibition of Nuclear Weapons is a crucial step in the direction of the shared goal of a nuclear-weapons-free world. It prevents the development, testing, production, manufacturing, acquisition, or stockpiling of nuclear weapons or other nuclear explosive devices, among a wide variety of other nuclear-weapon-related activities.

The agreement was signed in July 2017 and becomes effective in January 2021. 86 nations have ratified it, and 65 have signed it, UN News reported. The Secretary-General remarked that "disarmament is everybody's business, because life itself is everybody's business," and this is reflected in the fact that governments, civil society organisations, and other observers are present at the Vienna summit.

In addition to this, Guterres said expressing confidence that more nations will be convinced to join, and that the choices taken there will help solidify the Treaty's place as a crucial component of international disarmament and non-proliferation efforts. “It is only by joining in solidarity that we can eliminate this scourge and get back to the business of building a better, more peaceful and trusting world for all,” he emphasised.