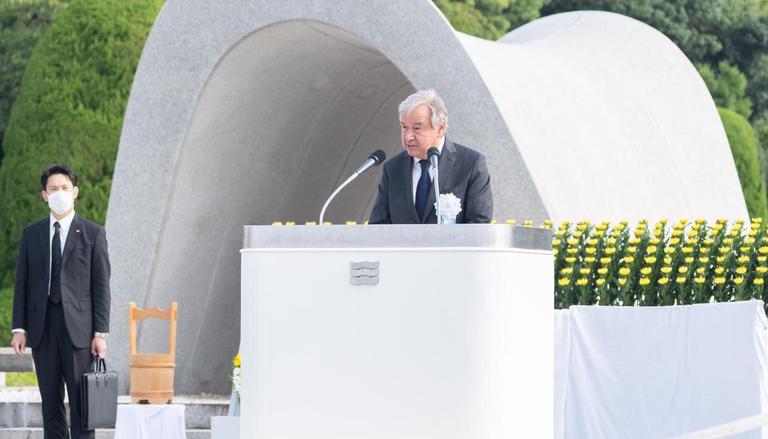 
United Nations (UN) Secretary-General Antonio Guterres said it was ‘totally unacceptable’ that countries possessing nuclear weapons admit the possibility of a nuclear war. The UN chief underscored that humanity is “playing with a loaded gun” as he decried the potential for nuclear disaster across the globe. Guterres made the remarks early Saturday as he attended the 77th anniversary of the first atomic bomb attack on Hiroshima at Hiroshima Peace Memorial Park. The park is dedicated to the legacy of Hiroshima as the first city in the globe to suffer a nuke attack at the end of World War II.

At the annual memorial, Guterres raised concerns over the risk posed by the crises prevailing in Ukraine amid war with Russia, the Middle Eastern region as well as the Korean peninsula as he described the horrors endured by the Japanese city. In 1945, during World War II, Hiroshima was left largely destroyed due to an atomic bomb detonated by the US. The UN head noted that "nuclear weapons are nonsense", adding that they guarantee no safety but only death and destruction. “Three quarters of a century later, we must ask what we’ve learned from the mushroom cloud that swelled above this city in 1945," he said.

UN chief said, “Tens of thousands of people were killed in this city in the blink of an eye. Women, children and men were incinerated in a hellish fire” noting that the survivors were “cursed with a radioactive legacy” of cancer and other health complications.

“We must ask: What have we learned from the mushroom cloud that swelled above this city?" he asked.

In Hiroshima today, I paid tribute to the tens of thousands of people killed by atomic bombs 77 years ago.

We cannot forget the lessons of Hiroshima and Nagasaki.

We must act in their memory & wipe nuclear weapons off the face of the earth once and for all. pic.twitter.com/taMQFAjD92

In Hiroshima, around 140,000 people died when the atomic bomb was dropped by the United States on August 6, 1945. The toll of the blast also includes the ones who perished after the blast from radiation exposure. Noting one of the most fatal events of the past, Guterres said that today “crises with grave nuclear undertones are spreading fast -- the Middle East, to the Korean peninsula, to Russia's invasion of Ukraine”, reiterating the warnings that he made earlier this week at a nuclear Non-Proliferation Treaty conference in New York.

He said, "Humanity is playing with a loaded gun."

UN urges nations to commit to ‘no first use’ policy

Calling the current Review Conference of the Treaty on the Non-Proliferation of Nuclear Weapons in New York a ‘sign of hope’, Guterres highlighted that countries with nuclear weapons must commit to the “no first use” of them. These nations should also assure other states that they will not use, or threaten to use, nuclear weapons against them.

“We must keep the horrors of Hiroshima in view at all times, recognizing there is only one solution to the nuclear threat: not to have nuclear weapons at all”, the UN chief stated.

“Take the nuclear option off the table — for good.  It’s time to proliferate peace. Heed the message of the hibakusha: “No more Hiroshimas! No more Nagasakis!”, he added, referring to two atomic bombs that were detonated first in Hiroshima and then Nagasaki three days later, on August 9 that year.