United Airlines Diverts Flight As Passenger Gets Stuck Inside Bathroom

United Airlines diverted flight after a passenger got stuck in the bathroom. The video of the incident posted by a user has gone viral on social media platforms

After a passenger got stuck inside the washroom of a United Airlines flight last week, it was reportedly diverted in order to release the passenger. The flight was heading from Washington DC to San Francisco but was diverted to Denver, Colorado. In a statement released by United Airlines, it was said the door of the washroom wasn't functioning during Flight 1554 's journey on the very day to a US media. They quoted that the lavatory door was inoperative while the passenger was trapped inside. The flight was scheduled to arrive in San Francisco at 8:38 pm on Wednesday, September 25, but landed in San Francisco only after 11 pm.
Read: Emirates Diverts Two Delhi-Dubai Flights For Suspected Drone Activity

The Airline further stated that after landing in Denver the door was opened by technicians. Later, the passenger was safely removed from the washroom. The Airlines also apologized to the passenger in question and others on the flight in their statement. The video of the incident is going viral on social media.
Read: Pilot Sees Baby Hedgehog On Runway, Stops Flight Take-off

A twitter user, Taylor Kimber, a Twitter user, shared a video of the incident that showed technicians working on the door. One can hear them say "We're just working on opening up the door at the moment, ma'am. We'll get you out soon, OK?". 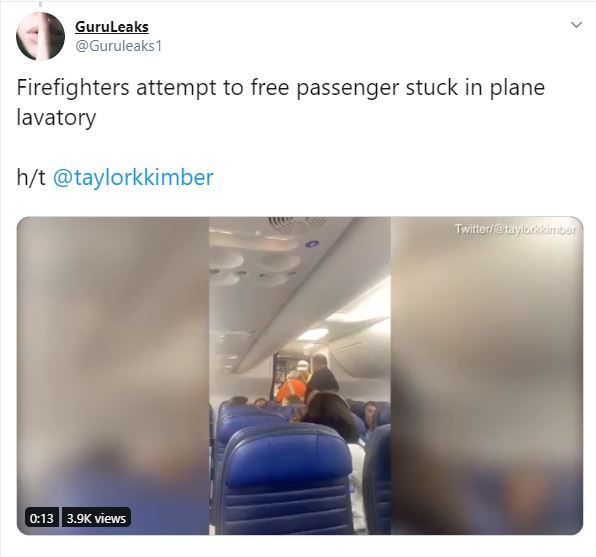 Read: Bees Create Havoc On Runway, Cause Delay In An Air India Flight

In similar incidents in recent days, an Air India (AI) flight bound to Agartala in Tripura was delayed for around an hour after a swarm of bees engulfed the airfield site and entered the plane's cockpit at the Kolkata airport. Likewise, a pilot of a Scottish airplane stopped the take-off when a baby hedgehog began wandered into the runway at Stornoway Airport. Another flight with 326 people on board was diverted to make an emergency landing in the country of Ireland when the pilot accidentally spilled hot coffee over the cockpit control panel over the Atlantic Ocean. Just like the others mentioned above, a jetliner flown by a subsidiary of Air France made an emergency landing in Iran stayed on the ground for several hours on before flying to Dubai due to malfunctioning ventilation.
Read: Flight Makes Emergency Landing After Pilot Spills Coffee On ACP