US Ties With S Korea, Others Irking China: WH Official Confirms Xi Made It Clear To Biden

US elevating its alliances with South Korea and other nations is causing China “heartburn”, said National Security Council Coordinator for the Indo-Pacific. 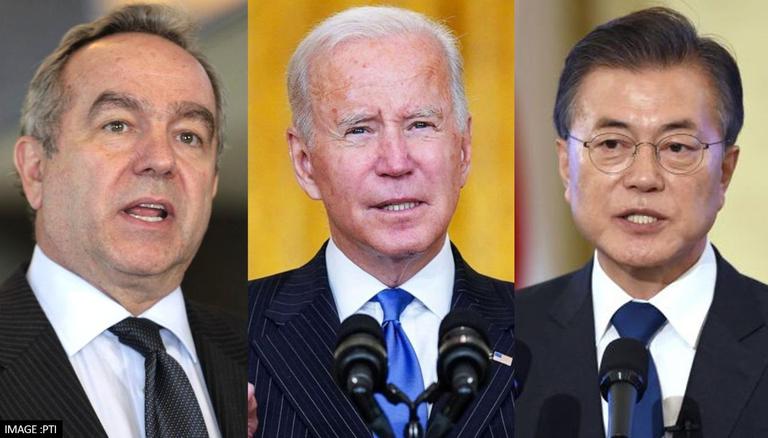 
National Security Council Coordinator for the Indo-Pacific Kurt Campbell on Friday, 19 November said that Chinese President Xi Jinping made it evident during the virtual summit with American counterpart Joe Biden some of Washington's actions are causing Beijing "heartburn". The US envoy noted US' bilateral alliances with Japan, South Korea among other nations are irking China even though America has termed its advances in the Indo-Pacific as a way to tackle both global and regional alliances.

According to South Korean agency Yonhap, Campbell’s remarks come after US President Joe Biden and Chinese President Xi Jinping held their first summit virtually on Monday. During a virtual forum hosted by the US Institute of Peace, which is a state-run think tank based in Washington, Campbell said, “I think it would be fair to say at the virtual meeting, President Xi made very clear that a number of things that the United States is doing cause China some heartburn.”

“And I think at the top of that list is our bilateral, reinforcing and revitalizing our bilateral security alliances with Japan, with South Korea, with Australia, the Philippines and Thailand," the White House official reportedly added.

As per the report, the US has stressed the importance of working with its allies as well as partners in tackling regional and global challenges that it says include maintaining a rules-based order in the Indo-Pacific. The South Korean news agency stated that even though Washington insisted its efforts to maintain stability in the Indo-Pacific is not targeting any specific country, many think such efforts are clearly to corner China. This, as per the report, puts more pressure on the US allies in the region.

Campbell’s remarks came after US National Security Advisor Jake Sullivan said that US alliances with nations including South Korea allowed Biden to engage with Xi from a position of power. Sullivan said, “He [Biden] has strengthened our alliances with the Republic of Korea and Japan, so that they are as strong as they have been in the history of those two alliances. That's the context for the meeting last night that is the strategic environment into which President Biden walked.”