Lukashenko warned Polish Armed Forces that messing with Belarus would lead to a nuclear attack. "If Duda has no brains, the Polish military does," he said. 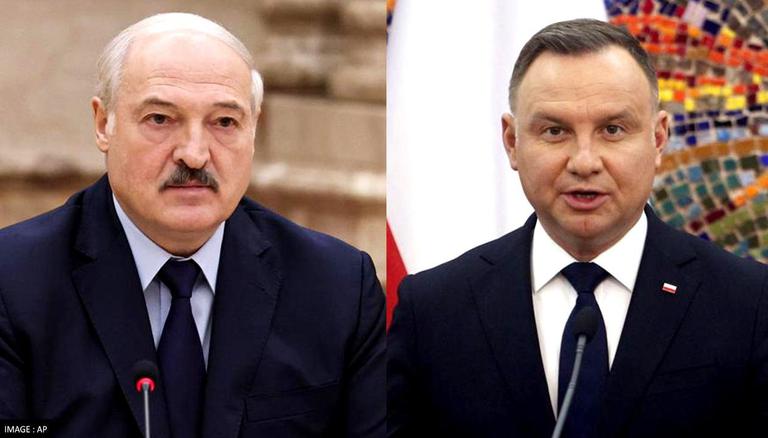 
Amid the ongoing war in Ukraine, Belarusian President Alexander Lukashenko launched a scathing attack on his Polish counterpart, Andrzej Duda, calling him a "brainless." The Belarusian leader also threatened Poland with nuclear weapons, despite Minsk not possessing any. Lukashenko warned Polish Armed Forces that messing with Belarus would lead to a nuclear attack.

"If Duda has no brains, the Polish military does, and they know that messing with Belarus means immediately getting a nuclear bomb," Nexta tweeted citing the Belarusian President. According to Lukashenko, his country is prepared to counter a possible threat from Poland and he believes the Polish military understands how Belarus would react in the event of an escalation.

Notably, the two European countries have long-standing border issues that have been further escalating since November 2021. Meanwhile, the Belarusian President has also warned the North Atlantic Treaty Organisation (NATO) against escalating tension in Eastern Europe. "It’s not a good idea to escalate things with Belarus because that would be an escalation with the Union States of Russia and Belarus. If they start to create problems… the response will be immediate,” Lukashenko stated as per Eurasia Times.

#Belarusian dictator Alexander #Lukashenko: "If #Duda has no brains, the #Polish military does, and they know that messing with #Belarus means immediately getting a nuclear bomb".

Reminder: Belarus does not own any nuclear weapons. pic.twitter.com/WoXZv9r3fb

Belarus is ready to respond to Western threats: President Lukashenko

Meanwhile, President Lukashenko also stressed that Minsk is ready to respond to any threats from the West. He cautioned the West that if they choose to escalate the issue, they will not be able to "save themselves." Additionally, Lukashenko recalled his joint address in St. Petersburg with Russian President Vladimir Putin, where they announced plans to modify Belarusian Sukhoi planes to carry nuclear weapons and declared that everything is ready for that. Meanwhile, officials in Poland, Lithuania, and Latvia believe the migrant influx is part of Belarus and Russia's hybrid war against the European Union (EU).

It is pertinent to mention here that tensions escalated within the European Union's borders after roughly 2,000 individuals were trapped between Poland and Belarus in November 2021. Since then, several incidents of clashes between migrants and border authorities have been reported.

Meanwhile, Belarusian President Alexander Lukashenko has been accused by the West of using immigrants as a tool to destabilise the 27-nation bloc in retribution for penalties placed on his alleged repressive rule. However, Belarus has repeatedly denied being responsible for the issue, which has seen an influx of refugees attempting to enter Poland, Lithuania, and Latvia.