the Canadian Senate approved Prime Minister Justin Trudeau's budget on Thursday, enabling it to confiscate and dispose of assets that are subject to sanctions 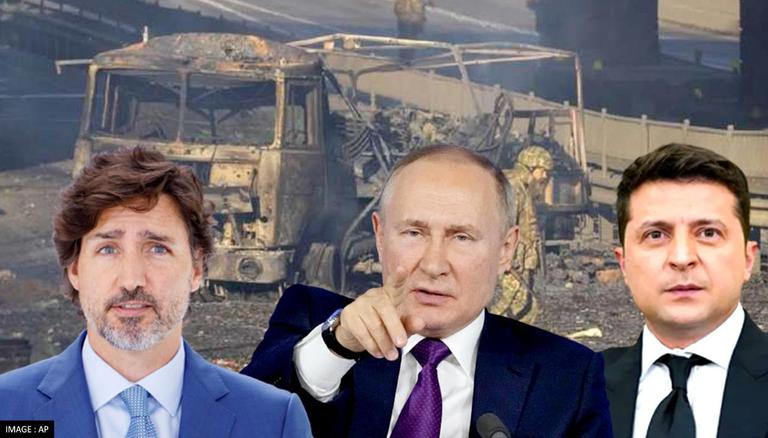 
As the all-out Russian aggression against Ukraine continues, the Canadian Senate approved Prime Minister Justin Trudeau's budget on Thursday, enabling it to confiscate and dispose of assets that are subject to sanctions due to the Russian invasion. According to The Guardian report, the Canadian government is currently permitted to collect and liquidate assets of individuals and organisations which have been sanctioned due to the incursion. Further, the money can then be used by the government to aid Ukraine.

Further, on June 9, Ottawa said in a statement that it has frozen more than $310 million in Russian assets since the Russia-Ukraine war started on February 24. According to the Royal Canadian Mounted Police (RMCP), Canada has essentially put a hold on $123 million until June 7. The Canadian Foreign Ministry also blocked $289 million worth of transactions. This follows after Ottawa announced in April that it will change its sanctions law to permit utilising confiscated funds as compensation for war victims and to aid in the reconstruction of Ukraine, according to a CBS News report.

⚡️Canada freezes and blocks over $310 million in Russian assets.

The Royal Canadian Mounted Police said in a statement on June 9 that they froze and blocked more than $310 million in Russian assets and transactions involving people sanctioned as a result of Russia’s war on 🇺🇦.

In response to Ukrainian President Volodymyr Zelenskyy's request to his allies to send heavy weaponry to the war-torn nation, Canada on June 15 announced further military assistance for Ukrainian forces. As per an official statement by the Trudeau government, the assistance, which totals US$9 million, adds to the nation's prior donation of M777 howitzers, more than 2,000 rounds of ammunition compatible with artillery, and training for the Canadian Armed Forces in the utilisation of this equipment.

Anita Anand, Canada's minister of national defence, made the announcement of the military assistance during the Ukraine Defence Contact Group meeting, which was hosted by Pentagon Chief Defence Lyyod J Austin III. Earlier, while speaking with her counterpart from Ukraine, Oleksii Reznikov, she mentioned the possibility of this assistance. Anand even asserted that not only was Russia's invasion unlawful and unwarranted, but it was also unjustified.

I announced that Canada will donate $9 million worth of M777 howitzer replacement barrels to Ukraine. pic.twitter.com/84dqbaKrab

In retaliation to Russia’s attack on Ukraine, Canada on June 8 declared penalties against the export of 28 services that were deemed "essential" for the functioning of the oil, gas, and chemical sectors, including accountancy and advertising. The oil, gas, as well as chemical services sectors, are the focus of the export embargo. As per media reports, these sectors are thought to account for nearly half (50%) of Russia's budgetary revenue.

Melania Joly, Canada's minister of foreign affairs, had announced the newest round of penalties.

The penalties, according to a statement from the Canadian government, were introduced in an effort to increase pressure on Russian President Vladimir Putin to remove his country's troops from Ukraine. The Canadian government emphasised in the statement that they continue to think that "Ukrainians deserve to live in peace" and urged the Russian government to put an end to the conflict in Ukraine.

According to the Canadian government's press release, penalties have been placed against over 1,070 people and organisations since Russia started its offensive in Ukraine.