For the first time since the onset of Russian war, state heads of France, Italy & Germany are expected to visit Kyiv for an in-person meeting with Zelenskyy. 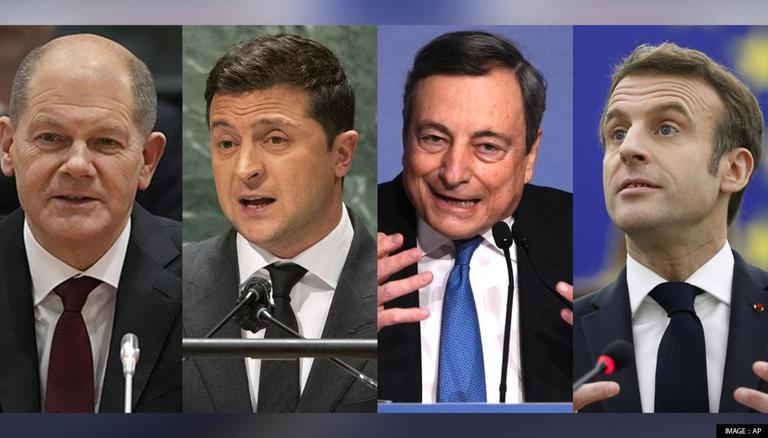 
For the first time since the onset of the Russian war, state heads of France, Italy, and Germany are expected to visit Kyiv for an in-person meeting with Ukrainian counterpart Volodymyr Zelenskyy ahead of the Group of Seven (G7) Summit. As reported by German publication Bild am Sontag, citing Parisian government sources, French President Emmanuel Macron, German Chancellor Olaf Scholz, and Italian Prime Minister Mario Draghi will visit Kyiv in late June. The report stated that the visit is aimed to bolster European unity and support of Ukraine.

The news comes after Scholz continues to face domestic and international criticism over its sluggish support to Ukraine in terms of military deliveries and insistence on talking to Russian President Vladimir Putin. However, on June 7, Scholz defended his stance, saying that Berlin was supporting Kyiv "more intensively than almost anyone else," Politico reported. Despite the accusations of being "hesitant" to supply weapons to Kyiv, Berlin in actuality is at fifth rank in terms of military support to Ukraine, as per Kiel Institute for the World Economy.

Hitting back at critics, Scholz further claimed that "Germany is one of the most important military supporters of Ukraine. Nobody supplies on a similar scale as Germany does. There are few that also do a lot such as the US...but Germany is one of the countries that use its capabilities on a very large scale," as reported by Politico. He then vowed to "do everything" in power to fend off Russian aggression. Scholz also briefly shed light on Germany's seriousness about EU integration, despite its scepticism about Kyiv joining the European Union.

READ | Olaf Scholz pledges $107bn for German army, says it will be 'largest' among NATO nations

EU President Ursula Von der Leyen on Saturday returned to Kyiv for face-to-face talks with Zelenskyy, reaffirming the bloc's support for the embattled nation. She assured Zelenskyy that the union will make a recommendation by next week on whether Ukraine should be offered a candidate status. This would mark a preliminary step toward a potential full membership for Kyiv. Speaking to Zelenskyy, Leyen said Ukraine has already done a lot to gain candidacy, nevertheless, there were still reforms to be made.

While most members agreed to Ukraine's EU ascension, two prominent members France and Germany are still not on board with the proposal. While Scholz earlier said that there were "no shortcuts" to the process, Macron seconded him agreeing that the path to becoming a full member could take "decades."