In Russia, Artist Detained For Swapping Supermarket Labels With Info On Mariupol Bombings

In another testimony of the Kremlin's crackdown on anti-war protesters, an artist has been jailed for replacing supermarket shelf price labels with information. 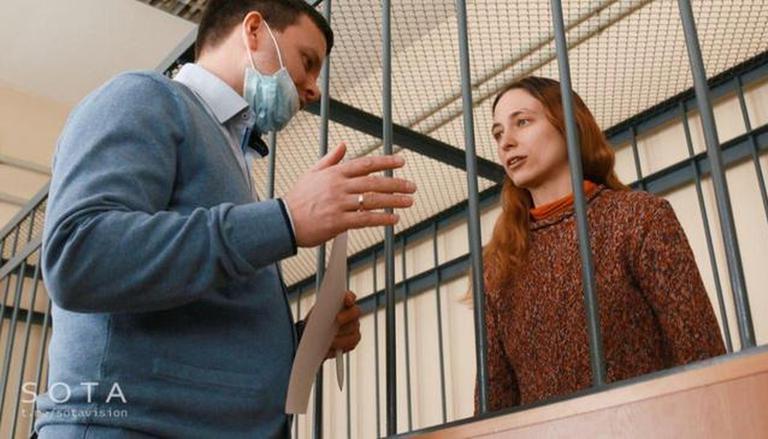 
In another testimony of the Kremlin's crackdown on anti-war protesters, an artist has been detained for replacing supermarket shelf price labels with information about Russian attacks in the besieged Ukrainian city of Mariupol. 32-year-old Sasha Skochilenko was apprehended earlier this week after a resident reported the altered labels to the police. She was later caught red-handed in CCTV footage and sent to judicial custody. While the young artist has been accused of spreading “false information,” she asserted that everything written on the label is true.

In the trial, judge Yelena Leonava noted that Sasha Skochilenko is “motivated by political hatred for Russia” and must be held in pre-trial detention until May 31." If the 32-year-old artist is convicted, she risks facing a prison term of at least 10 years and a fine of 3 million Russian Rubles.

Solidarity to St. Petersburg artist #SashaSkochilenko who swapped the price tags at a grocery store with information about civilian casualties in Mariupol. She’s now facing years in prison for spreading “false information” about the Russian military. #freeSasha pic.twitter.com/jgMoshcCCf

According to the court, the artist is “accused of carrying out serious actions against public safety” and that “acting deliberately, she installed fragments of paper containing knowingly false information.” The fact that she “has friends in Ukraine” and “a sister in France” is grounds to keep her in prison rather than under house arrest, as reported by the Art Newspaper.

This girl's name is Sasha. She is a musician from St.Petersburg.
She replaced price tags in supermarkets with antiwar leaflets such as ‘love is stronger than war’, and ‘violence is never a solution’.
Today Russian court has sent her to jail. She faces up to 15 years in prison. pic.twitter.com/3P6kXX7Yh3

What led to the artist's arrest

The St Petersburg resident replaced the price tag of items at Perekryostok supermarket with texts about the bombing of an art school and theatre in the Ukrainian city of Mariupol. Ukraine has blamed the Kremlin forces for the mass killings, however, Moscow has claimed there was a "humanitarian catastrophe" in the country, and it accused "Ukrainian nationalists" of instigating it.

On February 24, Russia's President Vladimir Putin ordered an unforeseen military operation in Ukraine, accusing the erstwhile Soviet state of threatening the safety and security of the Russian Federation. Parallelly, he also accused the Volodymyr Zelenskyy administration of clandestinely building a plutonium-based dirty bomb. It has been seven weeks since then and now, is a complete opposite narrative, Zelenskyy has warned the world against a potential Russian nuclear attack.

READ | Ukrainian surrenders increasing by the day in Mariupol, current number at 1,464: Russia

In the latest development, the UK Defense Ministry said that Russia still aims to make Ukraine abandon its Euro-Atlantic orientation and assert its dominance in the region. it said, "although offensive shifts to eastern Ukraine, Russia’s ultimate goal hasn't changed." The war that started in February entered day 53 on Sunday, April 17 with no ceasefire in sight.

READ | US should pay France for loss due to sanctions on Russia: French Prez candidate Le Pen

WE RECOMMEND
Ukrainian surrenders increasing by the day in Mariupol, current number at 1,464: Russia
Russia Ukraine war LIVE: US-consigned military assistance 'have begun arriving' in Ukraine
Russian troops plan to seal Mariupol for entry and exit, says Advisor to the Mayor
Sweden firm on not playing against Russia in women's European Championships if ban lifted
Russia-Ukraine war: Zelenskyy asks world to respond to Russia’s use of chemical