During the telephonic conversation, Zelenskyy congratulated Truss on her appointment as Britain's Prime Minister and invited her to Ukraine. 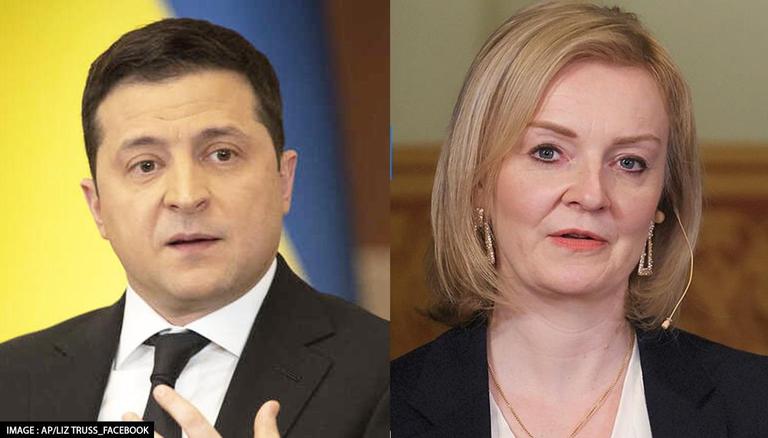 
Ukrainian President Volodymyr Zelenskyy held talks with United Kingdom Prime Minister Liz Truss and said that he is the first foreign leader to have a conversation with her. During the telephonic conversation, Zelenskyy congratulated Truss on her appointment as Britain's PM and invited her to Ukraine. He thanked Britain for the "major defence and economic aid." In the first telephone conversation since becoming Prime Minister, Truss reiterated UK's "full backing" for the war-torn nation and assured him that Ukraine can rely on Britain's assistance for the long term amid Russian agression.

"In her first call with a counterpart since becoming Prime Minister, she reiterated to the Ukrainian leader that he had her full backing, and Ukraine could depend on the UK’s assistance for the long term," the UK Prime Minister's office said in the statement.

During the phone call, Truss accepted the invitation of Zelenskyy to visit Ukraine "soon". Moreover, Zelenskyy and Truss discussed security guarantees, the participation of Britain in the recovery of Ukraine and increasing pressure on Russia. They also discussed the need to bolster global security and measures needed to "cut off the funds fuelling Putin's war machine.". While Zelenskyy stressed the need to declare Russia a terrorist state, Truss lauded Ukraine's fight for "sovereignty and self-determination" and called it "essential" that "Ukraine succeeds and Russia fails."

The UK PM "looks forward" to working with Zelenskyy in the coming weeks as Truss said the UK and its allies need to continue with their efforts for energy independence. Notably, Truss was formally appointed as the UK PM by Queen Elizabeth II at Balmoral Castle after she defeated fellow contender Rishi Sunak by over 20,000 votes.

"The leaders deplored Putin’s attempts to weaponise energy, and the Prime Minister said it was vital Russia’s blackmail did not deter the west from ensuring Putin fails. She also underscored the importance of ensuring the UK and our allies continue to build energy independence," the UK Prime Minister's office said in the statement.

I became the 1st foreign leader to have a conversation with the newly elected 🇬🇧 PM @trussliz. Invited her to 🇺🇦. Thanked 🇬🇧 people for the major defense & economic aid for 🇺🇦. It's important that 🇬🇧 is ready to further strengthen it. Attention was paid to security guarantees 1/2

I spoke to President @ZelenskyyUa this evening and reiterated our steadfast support for Ukraine’s freedom and democracy.

Russia's attempts to weaponise energy must not deter the West.

Ukraine can depend on the UK for support in the long term. 🇬🇧🇺🇦 https://t.co/Mai0LjY5AN pic.twitter.com/QdAAsMq8ZA

Notably, the UK has been supporting Ukraine with military and humanitarian assistance ever since Russia launched an offensive in Kyiv on February 24. Britain has also imposed sanctions against Russia to pressurise the Kremlin to end the war in Ukraine. It is pertinent to mention here that former UK PM Boris Johnson had thrice visited Kyiv since Russia's invasion of Ukraine. On 5 September, Ukrainian President Zelenskyy in a tweet said that he had a "summing up conversation"  with Boris Johnson and thanked him on behalf of Ukrainian citizens for his "bravery" to stand with Ukraine against Russia. Boris Johnson assured Zelenskyy that Britain will continue to support Ukraine every step of the way.

It's been a privilege to work with you @ZelenskyyUa, and I look forward to staying friends. The UK will continue to back Ukraine every step of the way, because we know that your security is our security, and your freedom is our freedom.