In the wake of Russia’s recent large-scale missile attacks on Ukraine, Poland has instructed its citizens to leave the Russian ally, Belarus. 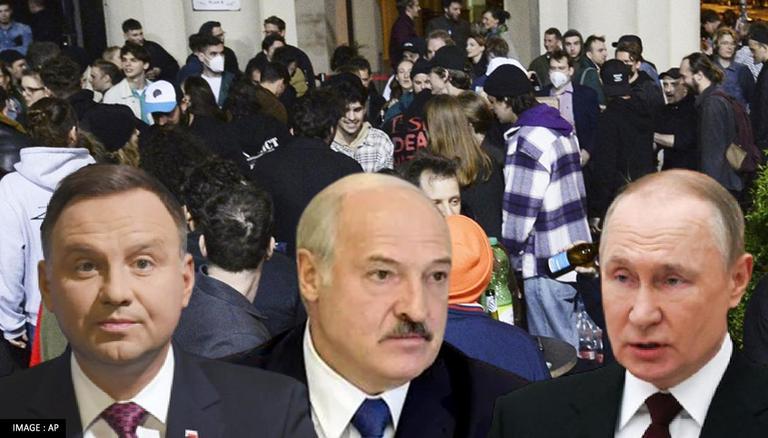 
In the wake of Russia’s recent large-scale missile attacks on Ukraine, Poland has instructed its citizens to leave the Russian ally, Belarus. Following the announcement of Belarus' President Alexander Lukashenko that a "joint military task force" with Russia would take place, Poland's capital, Warsaw, has issued a warning to its nationals living in Belarus, urging them to leave. Furthermore, Warsaw has been inspecting its bomb shelters.

As tensions between Poland and Belarus have grown, partly due to the conflict in Ukraine, the Polish government noted in travel guidance which is posted on its website, “We recommend that Polish citizens staying on the territory of the Republic of Belarus leave its territory with available commercial and private means”.

This came after Russia on Monday unleashed massive assaults on Kyiv and other regions of Ukraine, drawing condemnation from a number of countries. 41 of the 75 missiles launched on Ukrainian targets, according to the General Staff of the Ukrainian Armed Forces, were shot down by air defenses. Furthermore, Kyiv claimed that the missiles reportedly struck power stations and heavily populated regions in big cities, killing at least 11 people and injuring dozens more, Daily Mail reported.

Besides this, Alexander Lukashenko has stated that Russian forces would join his own and will be deployed to Ukraine's border, accusing Kyiv of preparing an assault with assistance from allies Poland and Lithuania.

It is worth mentioning that the relations between Warsaw and Minsk worsened when Poland accused its eastern neighbour of creating a migration crisis on its border in the year 2021, however, since the Russian invasion of Ukraine, tensions have increased.

According to Warsaw, the Polish minority in Belarus experiences official repression, with several local leaders having been put behind bars.

In addition, one of Putin's most ardent supporters has warned that the massive missile bombardment launched on Ukraine was only the "first episode" of Russia's retaliation for an explosion that destroyed a key bridge that connects Russia and Crimea. He also added that "there will be others", Daily Mail reported.

Following the attack, Poland's foreign ministry also chastised Russia for using its missile strike to target Ukraine's civilian population. Taking to Twitter, it said, “There is no excuse for Russian barbarism targeting the civilian population of Ukraine. The sounds of yesterday's attacks have not yet silenced when today Russia is committing further shelling of Ukrainian cities, including (Ukraine’s) capital.”

There is no excuse for Russian barbarism targeting the civilian population of Ukraine.

The sounds of yesterday's attacks have not yet silenced when today Russia is committing further shelling of Ukrainian cities, including 🇺🇦 capital.

Russian crimes will not be forgotten. pic.twitter.com/CLwMJOlIZq

Meanwhile, Maciej Wasik, the interior minister for Poland, stated that his country is now checking its bomb shelters to make sure they are functional. He emphasised that this action is "routine" and not a reaction to Russia's attack.