Prince Charles' goddaughter India Hicks handed out assistance on a charity mission to Ukraine as war with Russia continued to cause large scale devastation. 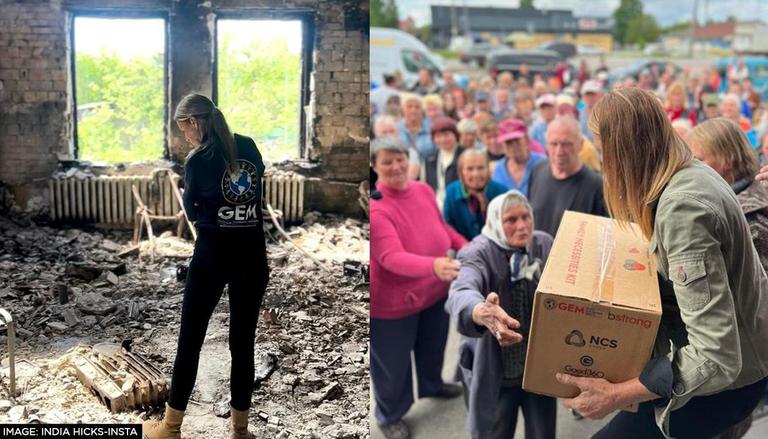 
The goddaughter of Prince Charles, India Hicks has handed out assistance on a charity mission to war-torn Ukraine, which has been devastated due to the Russian onslaught. Hicks released images of her charity on Instagram where she is seen assisting Ukrainians whose lives have been ruined by the conflict. She claimed that she had travelled to the country to assist communities affected by the Russian attacks. India is the daughter of David Hicks, a prominent interior designer and Lady Pamela Mountbatten, Prince Philip's cousin.

Fifty-four-year-old India travelled from Warsaw to the Polish border with her son 25-year-old son, Felix, before embarking on a 14-hour train journey across Ukraine. They came to a halt in Fastiv, Kyiv and Chernihiv, the country's northernmost city. India donated money to the Global Empowerment Mission, a non-profit that helps people affected by natural disasters around the world. She helped Ukrainian youngsters at a therapy shelter and transported clothing for war-affected families. Earlier, India travelled to Poland two months ago to assist Ukrainian refugees but she was chastised for promoting a "posh framing firm" during her journey.

She shared various images on Instagram, stating, "Disturbing, unsettling, stunning in its intensity. I could not have coped without Marzena and Felix beside me, travelling together across this fraught landscape. (sic)"

The mother and son also spent time with Anna, an elderly woman who was making tea in her Bucha home when Russian forces attacked it. In the Instagram post, she wrote, "This is Anna. Her home in Bucha was bombed by the Russians, whilst she was in it. She was alone, making tea at the time."

Meanwhile, Russian forces have continued their onslaught in the eastern part of Ukraine. In Severodonetsk and its neighbouring town Lysychansk, which is in Luhansk Oblast, Russian and Ukrainian troops are currently engaged in fierce combat. Russian forces, who are backed up by heavy artillery are now confronting fierce street-by-street battles, while regional officials in Ukraine stated that the conflict has cut out power and mobile phone service, terrorising citizens who have not been evacuated. The two cities, which had a combined pre-war population of roughly 200,000 people are the last major areas in Luhansk province that are under Ukrainian control.