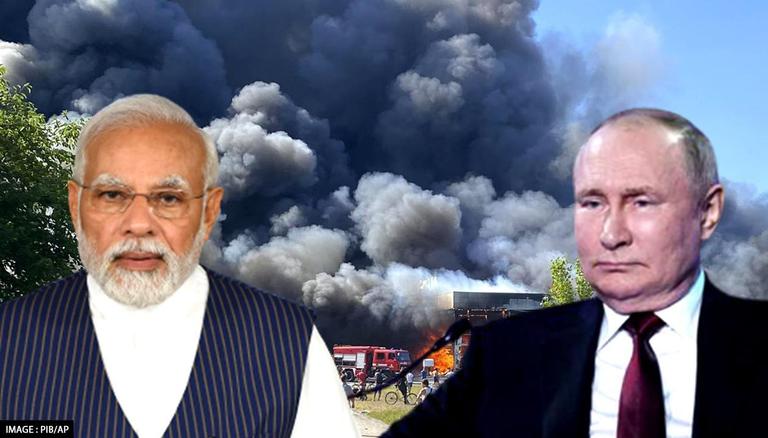 
As per the agreement made between Prime Minister Narendra Modi and Russian President Vladimir Putin during the 14th BRICS Summit which was convened on June 23-24, both the leaders held a telephonic conversation on Friday (July 1). Taking to Twitter, Russian Embassy in India stated that Putin briefed PM Modi on the ongoing Ukraine war where the Prime Minister reiterated India's long-standing position in the favour of dialogue and diplomacy.

☎️ As agreed during the #BRICS summit on June 23–24, Russian President Vladimir #Putin had a telephone conversation with @PMOIndia @narendramodi on July 1, 2022. pic.twitter.com/F9XsJ1Qy8N

At the request of PM Narendra Modi, Vladimir Putin also elaborated on the key aspects of the Russian special military operation, emphasizing the dangerous and provocative nature of the line of the Kyiv regime and its Western patrons aimed at escalating the crisis and disrupting efforts to resolve it politically and diplomatically.

Amid the war, the current state of affairs in the global food market were also touched upon. The Russian President drew attention to the systemic mistakes made by a number of states, which led to the disruption of the entire architecture of the free trade of food products and provoked a significant increase in their cost. Illegitimate sanctions against Russia have exacerbated an already difficult situation. The same factors had a negative impact on the global energy market. At the same time, Putin stressed that Russia has been and remains a reliable producer and supplier of grain, fertilizers, and energy carriers, including the Indian partners.

In the meeting, the topical issues of Russian-Indian relations were discussed in detail, paying special attention to the further development of mutually beneficial ties in the economic sphere.  A significant increase in the volume of bilateral trade, including mutual deliveries of agricultural products, was noted with satisfaction, the release added.

Both the leaders expressed mutual intention for the comprehensive strengthening of the special and privileged strategic partnership between Russia and India. Vladimir Putin and Narendra Modi agreed to continue personal contact, as well as interaction at other levels.

India's stance on the Russia-Ukraine war

It is pertinent to note that India still maintains its long-standing conviction that the differences between Russia and the NATO group can only be resolved through honest and sincere dialogue. Since the onset of the war, Prime Minister Modi appealed for an immediate cessation of violence and called for concerted efforts from all sides to return to the path of diplomatic negotiations and dialogue.

India earlier abstained from voting on the resolution that deplored Russia's attack on Ukraine in the UNSC and a subsequent resolution in the UNGA. Referring to such instances, US President Joe Biden had cited a "somewhat shaky" stance on the situation in New Delhi. However, India's position on the Russia-Ukraine war has remained neutral since the beginning, although, New Delhi has always stood upright in support of immediate resolution of the conflict through dialogue and diplomacy, further raising concerns over the humanitarian situation in war-torn Ukraine.

At the outset of Russia's invasion of Ukraine, India's priority was to ensure the safe evacuation of over 20,000 citizens stuck in the war-hit nation. Under the aegis of Operation Ganga, the Union government evacuated Indians who crossed the Ukraine border from Hungary, Poland, Romania, Moldova and Slovakia.