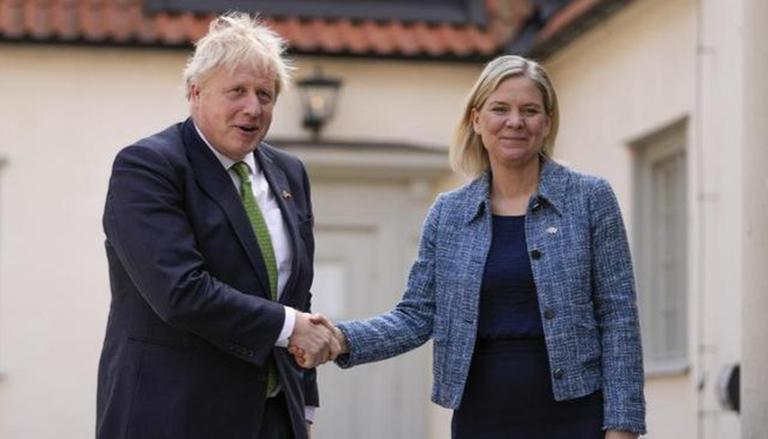 
In a key development, the UK government has committed to supporting Sweden and Finland "in the face of renewed threats" as both the countries are looking on to join NATO. British Prime Minister Boris Johnson on Wednesday, May 11, signed mutual security assurance declarations with Swedish counterpart Magdalena Andersson in a bid to bolster their security and fortify "northern Europe's defences." It is to be noted that the development comes at a time when Sweden and Finland are confronting warnings from Russia regarding the countries' prospects of joining NATO.

"The Prime Minister is signing historic declarations with Sweden and Finland today to reinforce their security and fortify northern Europe’s defences, in the face of renewed threats," UK PM Boris Johnson said in a statement.

We face a new reality. But we face it together.

Boris Johnson stated that the United Kingdom is "steadfast and unequivocal" in supporting Sweden and Finland. He further highlighted that the signing of these security declarations showcases the "everlasting assurances between the two nations," according to the statement released by the UK government. He further added, "These are not a short term stop gap, but a long term commitment to bolster military ties and global stability, and fortify Europe’s defences for generations to come." Johnson also said that the declarations signed between the two nations will allow Britain to cooperate with key Nordic partners and their armed forces in all sectors, which includes cyberspace. According to Johnson, the mutual security declaration will allow closer cooperation between UK and Sweden on technology and intelligence gathering.

"It’s worth emphasizing that if Sweden were attacked and looked to us for help and support, then we would provide it, but it’s up to Sweden to make the request and to spell out exactly what support is requested,” Johnson said at a joint press conference with his Swedish counterpart Magdalena Andersson.

"What we are saying emphatically is in the event of a disaster or in the event of an attack upon Sweden, then the U.K. would come to the assistance of Sweden with whatever Sweden requested," Boris Johnson said.

Today we made history by signing a joint declaration of solidarity to strengthen our security and defence ties and bring our nations even closer together.

We are literally and metaphorically in the same boat.

It is pertinent to mention here that UK Prime Minister Boris Johnson recently met Swedish counterpart Magdalena Andersson to discuss security cooperation between the two nations. During the meeting, both the leaders agreed that the Russian military offensive in Ukraine had altered international security. Both Johnson and Andersson underscored that their ties with Putin "could never be normalised," according to the statement released by the UK government. The leaders also discussed ways in which British and Swedish forces can bolster their military cooperation in the coming months. It is pertinent to mention here that Boris Johnson will be travelling to Finland to sign a similar security declaration with Finnish President Sauli Niinisto.

READ | UK to install solar power plant in space to meet energy needs; know all about it
READ | Juventus vs Inter Milan live streaming: How to watch Coppa Italia final in India, US & UK

WE RECOMMEND
UK: Car smashes into Boris Johnson’s London townhouse, cops say no offence committed
UK: Prince Charles delivers Queen's speech; Economy, healthcare among others on agenda
UK to install solar power plant in space to meet energy needs; know all about it
UK to launch first ever satellites from its territory in collaboration with US
UK Army to conduct military exercises across Europe as Russia-Ukraine crisis continues