“The enemy [Russia] caused a mass missile strike on the territory of Ukraine in several directions,” the Ukrainian Air Force Command said in a post. 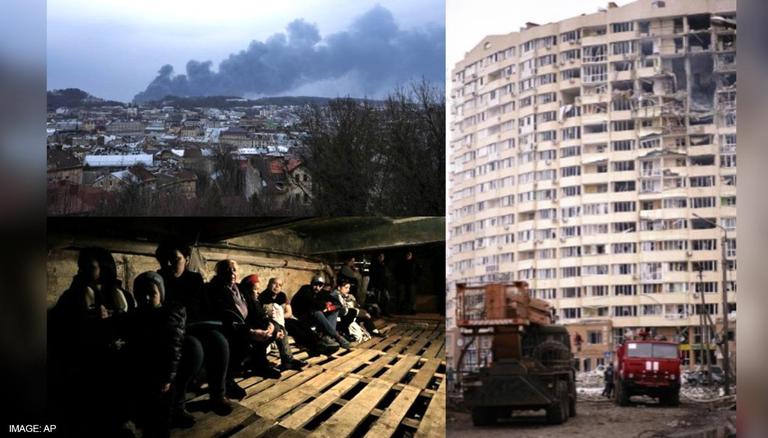 
Russia’s troops have fired at least six rockets on civilian cities in Ukraine, two of which struck the city of Lviv, Command of the Air Force Armed Forces of Ukraine said in a social media post. “The enemy [Russia] caused a mass missile strike on the territory of Ukraine in several directions,” the Ukrainian Air Force Command said. It added that six-winged missiles were launched, and some of them were hit by Ukraine’s air defense, while others still hit the targets. “There's certain destruction going on. The fire was quickly localized and a rescue operation was launched. The type of missiles, the tasks of infrastructure damage, and the presence of victims are specified,” stated Ukraine’s Air Force Command.

One 'suspicious person' apprehended and handed to Security Service of Ukraine

On Chornovola Avenue in Lviv, Ukraine's military patrol stopped a suspicious car. During the inspection of documents and the phone of the driver, the police found videos and photos of the transfer of the military. "He also had a photo of passports of men with the Luhansk registration and a lot of contacts with Russian numbers," said the regional governor, Maksym Kozytskyy. The man was detained and handed over to the Security Service of Ukraine. 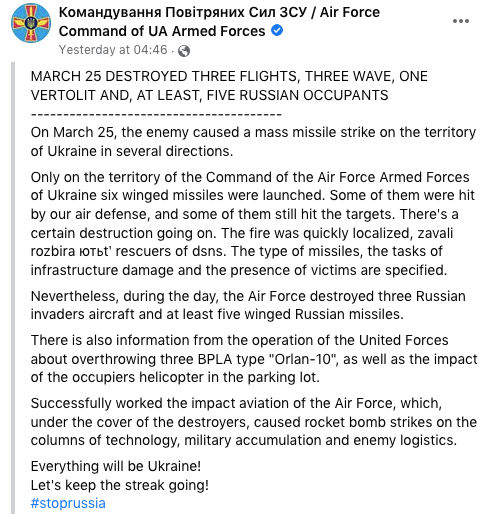 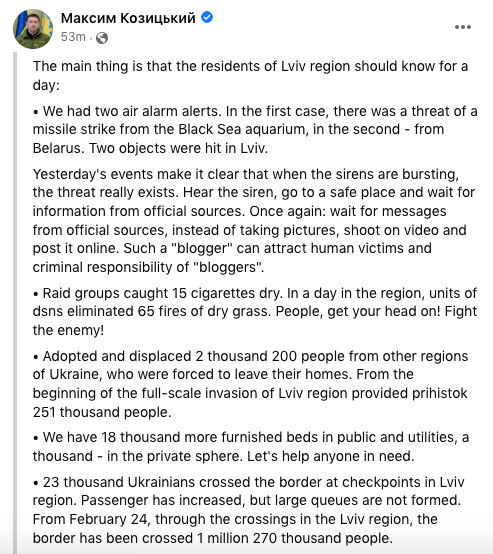 An industrial area in the northeastern outskirts of Lviv apparently injured five people, regional governor, Maksym Kozytskyy, said on Facebook. He added that a thick plume of smoke engulfed the area for over 6 straight hours. The second rocket landed a few hours later and caused three explosions, letting off air raid sirens. An oil facility and a factory connected to the military was ablaze. A crowded bomb shelter under an apartment block was another site of the blast, he told the press.

READ | Zelenskyy seeks 1% of NATO aircraft, tanks to be deployed in Ukraine amid Russian attack 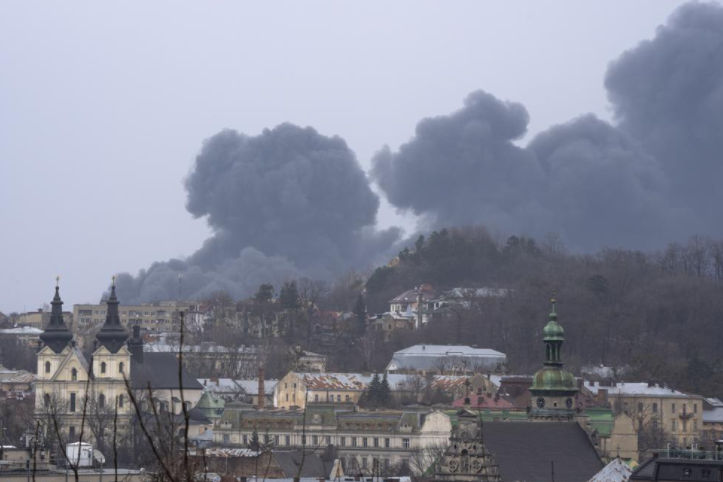 Ukraine’s Air Force destroyed three Russian invaders aircraft and at least five winged Russian missiles. There’s also information from the operation of the United Forces about overthrowing three BPLA type "Orlan-10", as well as the impact of the occupier's helicopter in the parking lot, the Air Force of Ukraine informed. Interception with missiles systems caused rocket bomb strikes on the columns of technology, military accumulation, and enemy logistics. The strikes were launched on the western Ukrainian city of Lviv as US President Joe Biden visited neighbouring Poland to discuss the humanitarian crisis caused by Russia’s war. The back-to-back heavy bombardment of the civilian neighbourhood has displaced close to 200,000 who have abandoned their homes and fled. 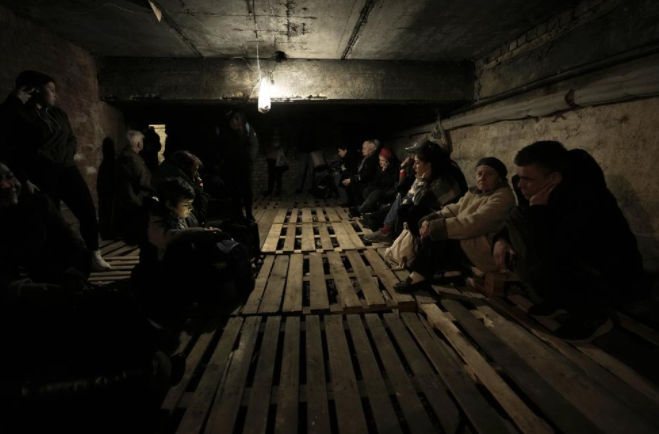 People shelter underground following explosions in Lviv, western Ukraine with Russia continuing to strike and encircle urban populations, from Chernihiv and Kharkiv in the north to Mariupol in the south. Credit: AP

A 34-year-old IT worker from the northeastern city of Kharkiv who took refuge in Lviv in a bomb shelter told Associated Press: “When I came to Lviv, I was sure that all these alarms wouldn’t have any results. Sometimes when I heard them at night, I just stayed in bed. Today, I changed my mind and I should hide every time. None of the Ukrainian cities are safe now.” The city is also a humanitarian staging ground for Ukraine and the Russian airstrikes will complicate the efforts to move people out safely.

“We were on one side of the street and saw it on the other side,” another Ukrainian said. “We saw fire. I said to my friend, ‘What’s this?’ Then we heard the sound of an explosion and glass breaking. We tried to hide between buildings. I don’t know what the target was.” The city of Lviv, the birthplace of Ukrainian nationalism, was home to about 700,000 people before Russia’s invasion but several have been  evacuated.