Ukrainian President Volodymyr Zelenskyy, who has been leading the country at the time of the war, received the Winston Churchill Leadership Award. 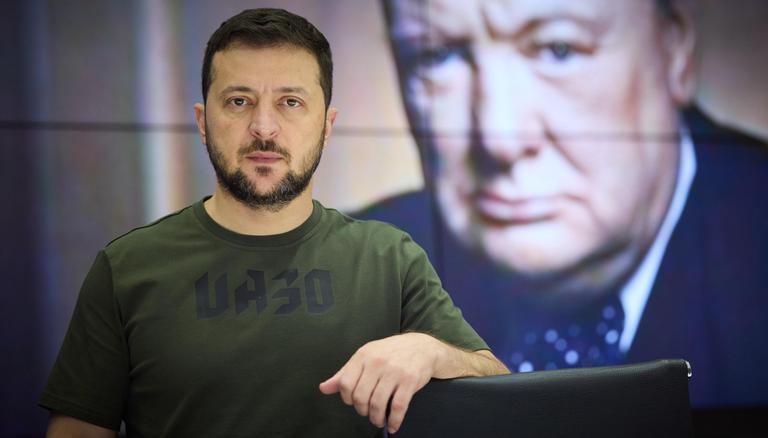 
Ukrainian President Volodymyr Zelenskyy, who has been leading the country at the time of the war, received the Winston Churchill Leadership Award from the International Churchill Society on Tuesday. Expressing gratitude towards UK Prime Minister Boris Johnson and chairman of the non-profit organisation, Laurence Geller, the Ukrainian head noted that the award reflects not only his efforts but also the heroism of tens of thousands of Ukrainian men and women who distinguished themselves in battles with the Russian aggressor. He said that the bravery of Ukrainians inspired the free world which prioritises freedom and democratic values over others.

"This award would not be possible if the entire Ukrainian people had not risen up to defend freedom from the attack of tyranny," Zelenskyy stressed.

It was an honour to present my friend President @ZelenskyyUa with the Winston Churchill Leadership Award today.

Volodymyr’s courage, defiance and dignity – all Churchillian qualities – have moved the hearts of millions and stirred a global wave of solidarity. pic.twitter.com/BGZDFenIzU

According to Zelenskyy, European history will always remember the aid which has been provided by the United Kingdom and other allies since the onset of the so-called "special military operation". Notably, he was pointing toward Johnson which has been backing Ukraine both-- militarily and economically. He underscored that Ukrainians are fighting not just for the land, the rights of people or the Ukrainian people, but fighting against every mindset which tries to invade other nations. Emphasising "unity" and "patience" as the main tool to fight against any tyranny, Zelenskyy said Ukrainians have proved the capability of the "united Europe" in combating the Russian aggressors despite limited resources. In fact, he bolstered that Russian troops and resources suffered a major loss since the onset of the war.

"No one knows today how much time and effort it will take to reach it. However, the victory is worth the effort. And it will become our shared history. So outstanding that you and I will later be quoted in the same way as we are now quoting Sir Churchill," added Zelenskyy.

It is worth mentioning here the Ukrainian head received the award for exhibiting immense gutsiness during the Russia-Ukraine war. Lauding the efforts of Zelenskyy, Geller compared him to Winston Churchill, who served as Prime Minister of the United Kingdom during the second world war. "Democracy in Europe is now threatened by tyranny, and this threat is stopped by leadership and heroism. Like Winston Churchill, President Zelenskyy shows that tyranny must not succeed, that people must have the right to choose their own path and their own life," said Geller. According to him, the Ukrainian head's devotion to the fundamental principles of democracy and firmness in defending his country helps Europe understand itself, and "his defence of democracy inspires us all."