Dance represents Pikachu, a yellow-coloured mouse-like creature in the "Pokémon" franchise. While footage attracted laurels from some, others disparaged it. 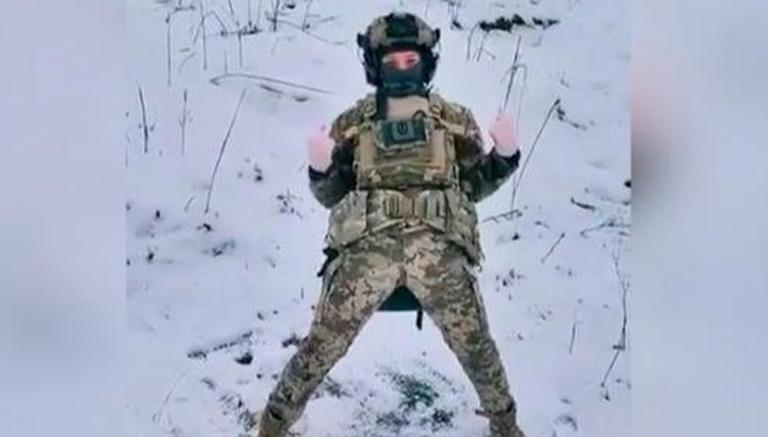 
Despite the war stress and continued assaults launched on her territory by the invading Russian forces that have claimed alleged 100,000 lives, a Ukrainian soldier went viral for her uplifting spirit as she performed the “Pikachu dance” on a snowy battlefield while loud explosions could be heard in the background. The footage was shared by Ukraine's Ministry of Defense (MOD) featuring an unidentified soldier dancing to a song while dressed in full combat uniform. The visuals have sparked mixed reactions.

“Winter has never been an obstacle to a good mood," read the caption that accompanied the video shared by Ukraine's Ministry of Defense. The 23-second clip shows the uniformed soldier pulling some great and energetic dance moves on a snowy location dressed in full camouflage gear with her equipment. As she enthusiastically grooved to the music, she displays her never failing spirit in the face if the brutal assaults as she also appears to smile.

Morning Pikachu Dance. Winter has never been an obstacle to a good mood.
🎥 by Operative #UAarmy pic.twitter.com/B5efM39lcT

'War is hell, soldiers in trenches are freezing to death..': Commenters pour opinions

The dance represents Pikachu, a popular yellow-coloured mouse-like creature in the "Pokémon" franchise. While the footage attracted laurels from some, others quickly disparaged it saying: "I thought the war was something serious." Meanwhile one other noted, "What is the point of these dancing videos other than trying to leave a fake impression? War is hell, soldiers in trenches are freezing to death and most likely are not thinking about Pikachu dance. If I were on the front lines seeing this I would be pissed." Another said, "I see we're in the tik-tok dance video phase of the war now." Some expressed rage saying, "100,000 dead and presumably twice that or more wounded and UKR forces are reduced to dance routines?"

A user slammed that the footage of the woman soldier was being condemned while that of a male soldier dancing on top of an armoured truck was not. "It's almost as if it's not the dancing that infuriates them so much as the dancer not being barefoot, pregnant, and in the kitchen," the commenter noted. The clip racked up more than half a million views, almost 30,000 likes, and 2,900 comments in just eight hours online and is now viral.

Even as the harsh winter conditions pose a challenge for the troops to fight with offensive slowing on both sides down, Kyiv has demonstrated optimism that the season would not weaken their resolve or spirit. The footage was recorded as Russia’s airstrikes hit the energy infrastructure of Ukraine, plunging several areas in dark. As the war continues into the 10th month, reports have emerged that the Biden administration is mulling considering Ukraine's request of providing the banned cluster munition warheads amid the nuclear threats made by Russia's authoritarian leader Vladimir Putin.