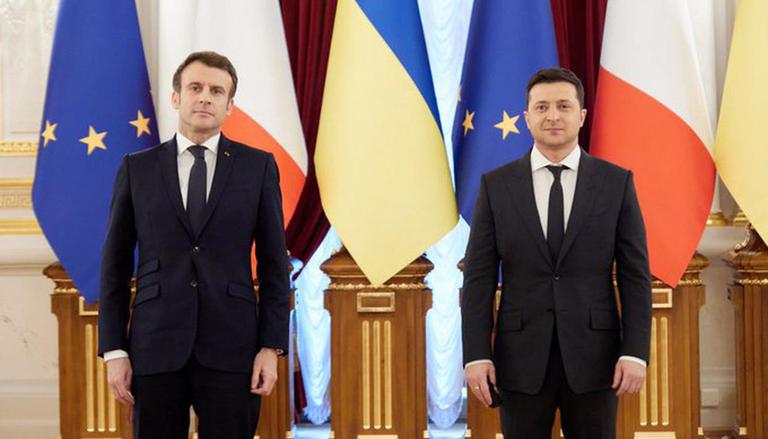 
French President Emmanuel Macron, on Thursday, held a telephonic conversation with his Ukrainian counterpart Volodymyr Zelenskyy wherein he deliberated upon the war-torn country’s quick accession to the European Union (EU). As Putin tries to salvage his war of attrition, both the leaders discussed the situation on the war front. Notably, it was Macron who last month had opined that it could take ‘decades' for Ukraine to be a part of the EU and advised the administration to join a parallel bloc.

Meanwhile, during the telephonic conversation, both the leaders discussed further support for Ukraine. Macron, in particular, asked Zelenskyy about his needs in terms of military equipment, political and financial support and humanitarian aid. Later, the French Presidency quoted Macron as saying that his country will remain mobilised to meet Ukraine's needs including heavy weapons.’ Both leaders agreed to stay in touch as the war continues to ravage eastern Europe.

Paris has been constantly backing Kyiv in its resistance against the Russian invasion. Earlier in April, the Macron administration said that it had delivered equipment and ammunition worth 100 million euros to Ukraine. The weapon list encompassed anti-tank missiles and Caesar self-propelled howitzers. Notably, during Thursday's conversation,  both the leaders also discussed security guarantees for Ukraine.

Had another phone conversation with 🇫🇷 President @EmmanuelMacron. Informed about the situation on the front. Discussed further defense support for 🇺🇦 and work on security guarantees. Special attention was paid to Ukraine's path to the #EU, we are coordinating steps.

Just a day before, embattled President Zelenskyy had said that Severodonetsk, a key city in Ukraine’s eastern Luhansk region, was mostly under Russian control. The gruesome war has continued for four months with fighting around the country's capital Kyiv intensifying in recent days. In his address to his compatriots, Zelenskyy declared the city the “epicentre” of the war. Notably, under the second phase of Russia’s Special Military Operation, Putin’s troops have shifted their focus to what they call the ‘liberation of Donbas.”

"Severodonetsk remains the epicentre of fighting in the Donbas," said Zelensky, referring to the region that comprises Luhansk and Donetsk. He further said, “It is a very fierce battle, very difficult, probably one of the hardest in the course of this war.” Zelenskyy further said that a decade ago Donetsk was a "strong, proud and developed" city. "And then Russia came. Brought ideas of just such an inadequate level. And now it is a ghost town that has lost most people, thousands of lives and absolutely all prospects," he said.

READ | 'Can any face mask protect you from Russian COVID-22?': Zelenskyy at Time 100 gala