The UN and the European Union recently called for calm and warned of the use of excessive force at protests against the Colombian government. 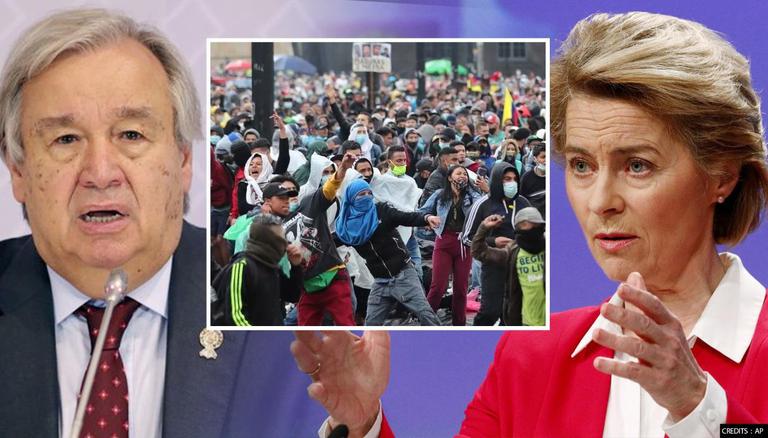 
The United Nations and the European Union recently called for calm and warned of the use of excessive force at protests against the Colombian government. The UN High Commissioner for Human Rights on Wednesday said that it was “deeply alarmed” over violence against protesters in the Colombian city of Cali, where “police opened fire on demonstrators” on Monday night. According to Colombia’s Human Rights Ombudsman, 16 protesters and one policeman have been killed in the demonstrations since last week, however, the figure does not include reports of deaths in Cali on Monday, which the UN said it is still trying to confirm.

In its statement, the UN urged Colombia’s government to protect the rights of protesters and said, “We are deeply alarmed at developments in the city of Cali in Colombia overnight, where police opened fire on demonstrators protesting against tax reforms. Law enforcement officers should abide by the principles of legality, precaution and necessity of proportionality”.

According to Bloomberg, the European Union also joined the chorus of criticism and condemned the reported deaths. EU spokesman Peter Stano said that it was a priority to stop the escalation of violence and to avoid any disproportionate use of force by security forces. Stano also called for security forces to avoid a heavy-handed response and urged calm.

US State Department deputy spokeswoman also Jalina Porter underlined the right of all people to protest peacefully. “Violence and vandalism is an abuse of that right," she said. Further, Porter added, "At the same time, we urge the utmost restraint by public forces to prevent additional loss of life".

Despite the withdrawal of the proposed tax reforms by the right-wing administration of President Ivan Duque, tens of thousands of Columbians and members of trade unions have continued their violent protests in the streets of Columbia. The tax reforms, contested as hiking financial pressure on low- and middle-income groups, was shelved after widespread opposition and angst from the opposition lawmakers in Columbia and the citizens, many of whom demanded the levelling of sales tax on utilities. Colombia’s finance minister Alberto Carrasquilla also resigned following five days of outrage which included riots and violent clashes as citizens demanded scrapping of 19 per cent of sales tax on gasoline and the government's expansion of the country’s tax base.

Despite pulling back the tax reform proposal, protesters continued the marches condemning the Columbia government’s “mishandling” of the COVID-19 pandemic, as they alleged that the withdrawal of the tax proposal “wasn’t enough”. Rallies were held in Columbia’s populous cities including Bogota and Cali, as well as Medellin, Barranquilla, and Cartagena.  In many cities, aggravated protesters clashed with the law enforcement, who used tear gas canisters and stun grenades to disperse the angry mob.

Last week, a police officer was stabbed by the reform seekers in the city of Soacha south of Bogota, incident demonstrators told reporters on the ground was flared by officers’ human rights abuses against the protesting crowd. Protesters have vandalised and ransacked buildings, and caused damage to the property, as they confronted the police in a national outcry of pandemic-related poverty, loss of jobs and rising unemployment. Columbian Twitter also expressed outrage at the administrative policies, demanding reforms as they ran the #FixTheCountry hashtag.