In Peru's ancient city of Chan Chan, archaeologists have discovered the remains of 25 people, the skeletons were discovered in a 10 sq m location. 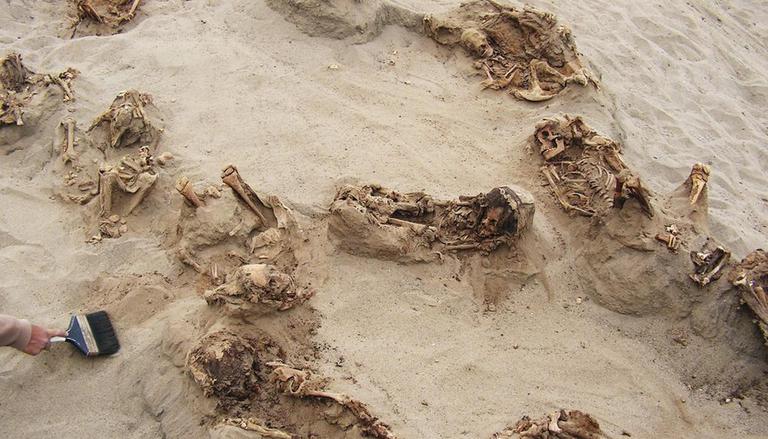 
In Peru's ancient city of Chan Chan, archaeologists have discovered the remains of 25 people. As per the reports of BBC, the skeletons were discovered in a 10 sq m location in what was formerly the Chim empire's capital. Experts believe the mass tomb was a burial site for Chim aristocracy. Most of the remains belonged to young women, according to archaeologist Sinthya Cueva, who also stated they are all under the age of 30. Cueva demonstrates that the Chim handled and transferred their loved ones' remains. Local media said that the burial also contained about 50 pieces of ceramics.

While the Chim was known for doing human sacrifices, including those of youngsters, archaeologist Jorge Meneses Bartra said there was no proof that those in the newly discovered cemetery perished due to human sacrifice, according to the British news organisation. Scientists will conduct experiments to try to figure out why they died.

Many skeletons were bleached by the weather and jumbled together

Meneses said one of the skeletons' positions showed it was buried there soon after the person died. However, many skeletons were bleached by the weather and jumbled together, implying they were transported to the gravesite later. According to Meneses, the human remains are mostly intact.

READ | Peru president challenged by his own party over Cabinet

It was discovered three weeks ago near Chan Chan, roughly 500 kilometres north of Lima, Peru's capital, according to Daily Sabah. The Chimu culture flourished on Peru's north coast between 900 and 1450 before succumbing to the Incas. Chan Chan was a fortress of the Chimu civilisation. At its peak, it covered over 20 square kilometres, had ten fortified palaces and housed approximately 30,000 people. In 1986, UNESCO designated it as a World Heritage Site, however, it is also on the World Heritage in Danger list.

Remains of more than 140 children were also discovered in 2019

In 2019, remains of more than 140 children and llamas were also discovered in Peru who are thought to be killed in what is supposed to be a mass sacrifice to placate the gods of a now-extinct religion and shocked everyone. According to Daily Mail, during the gruesome ritual, the hearts of several children and juvenile animals were severed. The kids were from the ages of five to fourteen. Tulane University anthropology professor John Verano stated that this archaeological find astounded everyone and that they have never seen anything like it before.