The 300ft structures at Eggborough power station in North Yorkshire were levelled by England based DSM Demolition Group on October 10, Sunday. 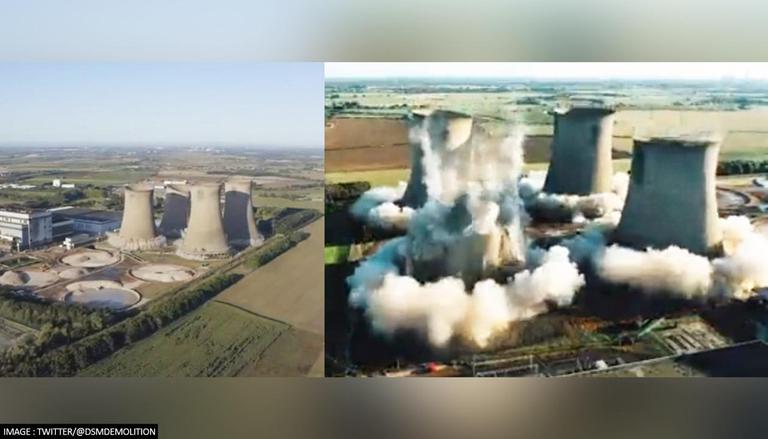 
Nearly two months after four giant cooling towers at Yorkshire power station were demolished, the remaining four were blown up in a huge morning explosion on October 10.  According to the reports of UK based media outlet Metro News, a huge crowd had gathered near the Yorkshire power station to witness the dramatic implosion of the historic structure. The media report said that the 300ft structures at Eggborough power station in North Yorkshire were levelled by England based DSM Demolition Group— one of the United Kingdom's leading demolition and decommissioning companies. Meanwhile, while speaking to Metro, DSM technical director, Billy Young, said:

"We are happy that all the preparation and hard work that has led up to today has empowered us to have a successful explosion."

Before pushing the explosion switch, police took over the control and closed the nearby roads. The media report said around 40 security guards were deployed near the exclusion zone. Notably, the 2,000-megawatt power station started producing power in 1967. In 2018, the coal-fired power station was decommissioned after 50 years of service. Subsequently, the government-ordered demolition of the iconic structure that had once employed more than 300 employees. According to Metro, four of its eight towers, each holding around 11,000 of reinforced concrete, were smashed as part of redevelopment plans.

Site to be converted into industrial & distribution park

The media report said that the giant cooling towers had been a Yorkshire landmark for more than 50 years as they were visible for miles. "We understand that a large number of Eggborough inhabitants and commerce could have been disturbed by the work, but we have pulled hard to interact with them behind the scenes and by messages to lessen this in as much as practicably feasible," said DSM technical director to Metro. "We would like to appreciate them and the wider society for their tolerance so far and assure everyone that we will do all we can to minimise any further disturbance." It is worth mentioning with the demolition of all eight giant cooling towers, the St Francis Group will turn the area into an industrial and distribution park. The company had acquired the site in 2019.