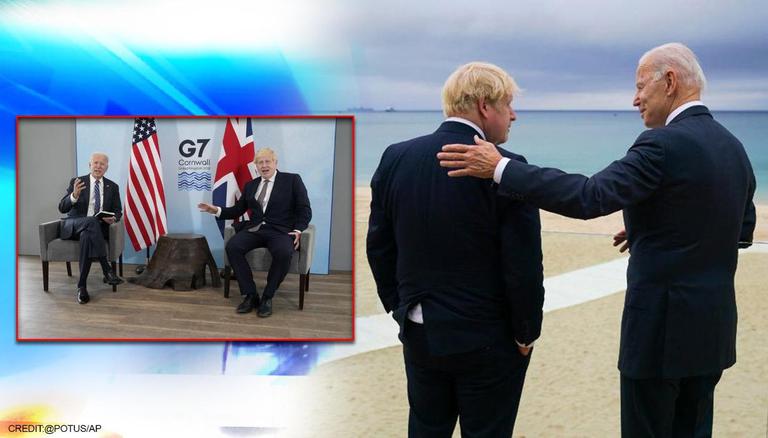 
UK Prime Minister Boris Johnson on June 10 gave US President Joe Biden a framed photograph of a British mural featuring Black 19th century abolitionist Frederick Douglass, said Downing Street following the first in-person meet of both leaders ahead of the Group of Seven (G7) summit in Cornwall. Striking a comparatively ‘warm tone,’ Biden and Johnson utilised their maiden meet to underline the commitment to enhance the historic ties of their nations and keep aside the differences, at least publicly. As Johnson and Biden met, the UK Prime minister on Thursday described the new administration as “a breath of fresh air.”

As per the Daily Mail report, UK and US leaders exchanging gifts is a tradition. While Johnson presented Douglass mural to the US President, Biden gave the British PM a new America-made bicycle and a helmet to mark their first gathering. Further, Bidens also gave Carrie Johnson, UK PM’s newly-wedded wife a leather tote bag made by the wives of American troops, as well as a presidential silk scarf.  With a nod to Black Lives Matter, the mural that Johnson gifted depicted the former slave, Douglass who went on to become a leading figure in the 19th-century abolitionist movement in the United States.

"The phonograph brought me nearest to a sense of divine creative power than anything I ever witnessed before. It raises the question as to the boundary of the human soul, the dividing line between the finite and the infinite."

Reportedly Douglass travelled to Ireland and Great Britain in the 1840s while on a speaking tour. The gifted image is painted by Ross Blair and it is a part of a mural trail around Edinburgh and the photograph was captured by Melissa Highton, an American-British dual national. Johnson also gave US First Lady Jill Biden the first edition copy of Daphne du Maurier’s The Apple Tree. Downing Street also said in a statement that the choice of the book was to reflect Du Maurier’s Cornish links. The author reportedly lived in the country and drew inspiration from her surroundings.

The special relationship between the United States and the United Kingdom is stronger than ever. Thank you for hosting me today, Prime Minister Johnson. pic.twitter.com/VTo9kEMhof

The future of the world’s stability and prosperity lies in cooperation between the UK and the US, the closest of partners and the greatest of allies 🇬🇧🇺🇸 pic.twitter.com/lzLaOkufTS

The UK-US partnership is more important than ever as we #BuildBackBetter and greener from the pandemic 🇬🇧🇺🇸 pic.twitter.com/Vhn0URBmpN

When did previous giving of gifts take place?

Since it is common for American and British leaders to exchange gifts at the start of tier formal visits, the previous exchange took place when former UK Prime Minister Theresa May gave former US President Donald Trump a framed typescript copy of a draft of the 1941 ‘Atlantic Charter’ during his visit to Britain. The same charter which was agreed by former US President Franklin D. Roosevelt and former UK Prime Minister Winston Churchill to set out a joint vision following World War II was looked at by both Johnson and Biden on Thursday as well.

Apart from gifts, the major takeaway from Biden-Johnson’s meet is the reviving of the Atlantic Charter. On June 10, US President and UK PM signed a new Atlantic Charter, modelled after the 1941 agreement that outlines at least eight crucial areas for the cooperation of both nations and as Johnson said, “to build back better.” The revamped charter says it builds “on the commitments and aspirations set out eighty years ago, affirms our ongoing commitment to sustaining our enduring values and defending them against new and old challenges."

How it started. How it's going.