At least eight people were arrested as Greenpeace activists tried to block the movement of a Russian oil tanker that had arrived from Moscow. 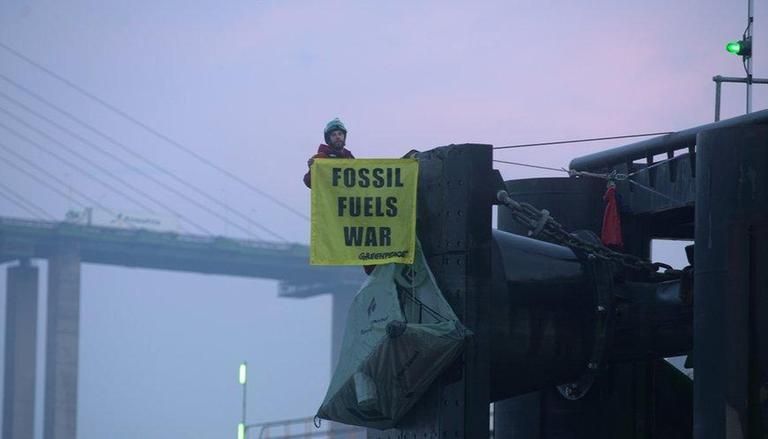 
At least eight people were arrested as Greenpeace protesters tried to block the movement of an oil tanker that had arrived from Moscow, The Independent reported. According to the report, the oil tanker that arrived in the Thames from Russia was carrying presumably, 33,000 tons of Russian diesel fuel.

The security officials told the British daily that the environmental activists snuck past security and mounted onto the area where the ship was meant to dock. The incident took place on Sunday night. The officials said that the Andromeda tanker fled soon after the protestors started gathering in more numbers.

Why are we stopping this ship from docking?

Fossil fuels are funding Putin’s war in Ukraine. This ship alone contains tens of millions of £’s of Russian diesel.

The UK needs to get off Russian gas and switch to renewables for good. Learn more. 👇https://t.co/q5p6kqVCgG

Photos and videos which were released by multiple media organisations showed the environmental activists showcasing banners saying “oil fuels war” and “fossil fuels war" during the protest. According to the independent global campaigning network, activists remained on the scene till Monday morning.

"Greenpeace activists have stopped a tanker carrying 33,000 tonnes of Russian diesel from docking in Essex. That’s worth an estimated £30million, which would go straight back to Putin to fund his invasion of Ukraine," according to the statement released by the environmentalist organisation on Monday. "Dodging security, 12 Greenpeace volunteers got onto the Navigator Terminals jetty on the River Thames late on Sunday night. Then they set themselves up to prevent the Andromeda tanker from docking and unloading its cargo," it added.

Police say they are not against protestors

Meanwhile, Essex Police confirmed they arrested at least eight people in the connection to the last night's protest. However, it added that the police are not against the protest but had to intervene in the matter to avert any critical crisis that may lead to the loss of lives.

"Our officers are currently working to resolve the situation quickly and safely. Policing is not anti-protest, but we must intervene where there is a risk to life or where there is suspicion laws are being broken," The Independent quoted the police officials as saying.