To commemorate the World Vegan Day, UK launched its first-ever vegan butcher establishment in London that will sell a meat-free version of baycon and soysage.

To commemorate the World Vegan Day held on November 1, UK launched its first-ever vegan butcher establishment in London that will sell a meat-free version of baycon and soysages. Inaugurated on Sunday, the Rudy’s Vegan diner opened with an assortment of plant-based products and the mock meats cooked out of the vegan staples. “We're London's first all-vegan diner. We serve up veganised versions of classic American junk food,” the establishment wrote in its blog post.

Offering a vegan menu that’s prepared like meat, Rudy’s bill of fare comprises meat-free burgers and giant seitan hot dogs, dairy-free milkshakes, and pastrami-packed sandwiches for the vegan customers who’ve been devoid of tasting the meat products. The vegan non-meat butcher shop is a brainchild of veteran vegan chef and co-owner, Matthew Foster. The establishment offered classic diner meat dishes in vegan form for “guilt-free, mouthwatering” dining. In its launch, London’s first of a kind butcher shop offered up to 100lbs of free baycon to the first guests through the door. “That's half a pound each and over 5000 slices of the good stuff,” the establishment said in a post. 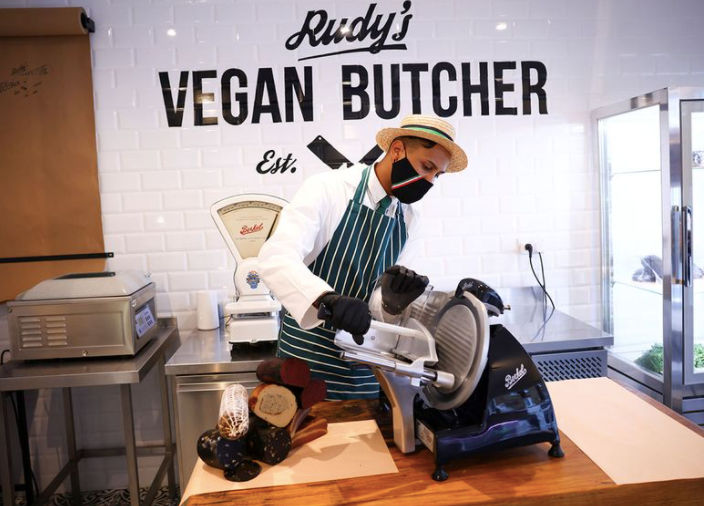 According to a release by Rudy’s, the idea of the meat-free version vegan meals to be made available in London’s first vegan diner is based on limiting the animal-derived ingredients such as meat and dairy products. The man behind the meals, chef Matthew Foster, who has catered for Prince Albert of Monaco was drawn to such a concept due to his “his curiosity, open-mindedness, and love for animals.”

📣 THE COUNTOWN IS ON: RUDY'S VEGAN BUTCHER OPENS ITS DOORS IN ISLINGTON ON 1 NOV📣 🥓🥓 In just two weeks on World Vegan Day, Rudy's Vegan Diner is bringing the first permanent vegan BUTCHER to London town 😱 We will be giving away 💯 pounds of FREE baycon to celebrate. That's more than 5000 slices! Each customer gets a half pound each until it lasts so🏃‍♂️🏃‍♀️ 🥓🥓 Imagine stocking your fridge with Chef @matthew.j.foster's homemade pastrami, dirty burger patties, cheeze sauce & chilli-non-carne. Take them home with you & get creative in the kitchen! You can even recreate your own Rudy's specials and fill your basket with a rack of jack, lobstah salad, meatballs, chick'n lover pate, shredded BBQ pulled porc and even roast turk'y! LOOK 👀 ➡️ 🥓🥓 Oh WAIT, keep reading. There's more exciting news 👏 🥓🥓 If you can't make it to London, don't worry! You can order Rudy's Vegan Butcher goodies ONLINE & we deliver nationwide 🇬🇧 All online orders made on World Vegan Day include a FREE pack of baycon. Remember to pile your online basket high with homemade scramble v-egg, soysage patties & bloody delicious black puddin' to go with that free baycon. 🥓🥓 Looking for something new? Try out our new charcuterie selection: smoked ham, salami de provence, pepperoni, oh and of course that pastrami y’all keep talking about! Oh, what to do with it all 🤔 🥓🥓 That's all happening in just TWO weeks on 1 November. Stop by our new vegan butcher on Upper St in Islington or order online and check it out. Who can say no to FREE baycon?

As per the Data by the law firm EMW, UK witnessed a whopping 128 percent surge in the trademarks registered for vegan food in 2019. Meanwhile, Matthew said that having been invited to several slaughterhouse vigils and speaking with vegan activists about the farming industry, “his eyes were open and his mind was full of inspiration”. A new team of butchers designated in 2017 discovered alternative meat food products and tweaked labels to vegan sausages, Turk’y rolls, sliced mock meats, cuts, joints, raw patties, pulled porks made entirely of plant staples.

Read: Banksy's 'Show Me The Monet' Auctioned At A Whopping £7.5 Million In London