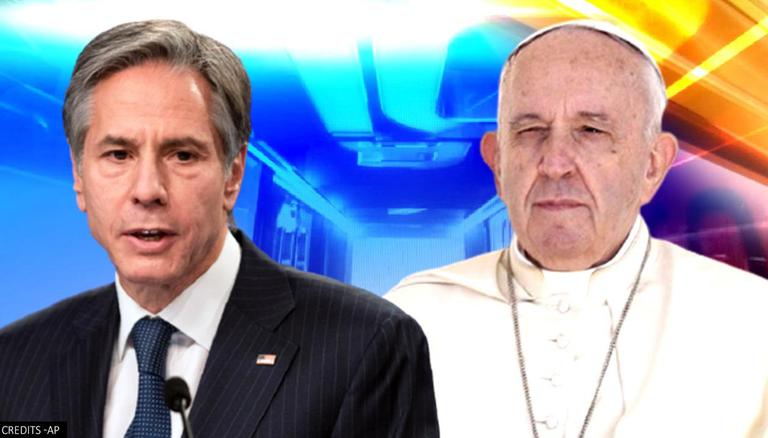 
US Secretary of State Antony Blinken’s visit to Pope Francis and top Vatican officials on Monday is expected to stabilize the thwarted relations between the Holy See and the United States. Blinken arrived at the Sistine Chapel in Vatican City on June 28 and first met with Holy See Secretary of State Cardinal Pietro Parolin, and Holy See Secretary for Relations with States Archbishop Paul Gallagher. He then shared an audience with Pope Francis ahead of the ministerial meeting of the Global Coalition to defeat ISIS in Rome.

Pope Francis received Biden’s new secretary of State, having earlier declined an audience to the Secretary of State Mike Pompeo during the Trump administration that heightened tensions between the Vatican and the US. Pompeo had questioned the Holy See for not denouncing the human rights abuses in China. Trump’s Secretary of state, who has ancestry in Italy, had also asked the Catholic Church to use "moral authority" and "capacity to influence" to denounce China’s human rights violations that created a rift between the Vatican and the US. Even as some senior diplomatic officials held a "serene and cordial" discussion with the then US Secretary of State, the pontiff refused to meet with him.

As cautionary, Biden’s top diplomat during his visit avoided affronts and instead focused on speaking about the shared values and ideas between the US and the Vatican, and other key issues such as climate change, debt relief for impoverished countries, human trafficking, systemic racism, and violence, according to Dept. of State press release. Although, the larger impact of the visit remains unclear amid a festering dispute between the religiously observant Catholic US president Joe Biden and the conservative American Catholic bishops who are inclined to deny the former leader and other prominent pro-choice Catholic politicians a communion.

Biden may be denied full church participation as the bishops are contemplating a 2/3rd vote by early November denying him and other pro-choice leaders the altar due to their legal abortion policies and for supporting same-sex marriage. A document initiated by Los Angeles Archbishop Jose H. Gomez, which is still being drafted, was voted for earlier this month to deny Communion to US President for his unwavering support to reproductive rights, which the Bishops stated, violates Church doctrine.

Pope Francis, meanwhile, had asked the US Conference of Catholic Bishops to defer the Communion document citing such issues needing more time and understanding to resolve. Pope and the US president Joe Biden are expected to meet in October, according to multiple reports.

Glad to be in Italy to underscore the importance of Transatlantic unity and the strong U.S.-Italy relationship. Looking forward to meeting with my counterparts, co-chairing the Global @Coalition to Defeat ISIS Ministerial, and joining the #G20 Ministerial Meeting in Matera. pic.twitter.com/MEe2AgdXEg

On Monday, during Blinken’s trip to Italy, acting Assistant Secretary of State for Europe Philip Reeker, at a briefing, stated that the US and the Holy See enjoy a “close partnership” wherein both seek to peacefully resolve a number of crises globally, according to LA Times. Reeker particularly dodged the questions about Bishops' dispute with the Biden administration due to his public policies.

Focusing mainly on the climate change movement, Reeker further added, that Pope Francis has shown long-standing leadership on the imperative to tackle the climate crisis as he called on the political leaders and civil society to take care of the environment by working together with the United States to achieve the collective ambition and by implementing national emissions reduction targets.

The Church and the US were at odds over former President Trump's withdrawal from the 2015 Paris accord to tackle global warming. Although Biden's reentering the US into the agreement was largely welcomed by the Vatican. Blinken meanwhile also underscored the US and Vatican's shared commitment to freedom of religion. US Secretary of State Antony Blinken has been on a trip to Europe which includes Germany, France, Italy, and the Vatican between June 22-29 to meet with the Italian leaders, Pope Francis, a group of 20 leaders, and ministerial-level officials.