As Juneteenth Becomes Federal Holiday; Here's Why It Is Celebrated Across The US

Joe Biden on June 18 signed a law making Juneteenth, which commemorates the end of slavery in America, a national holiday recognised by the federal government. 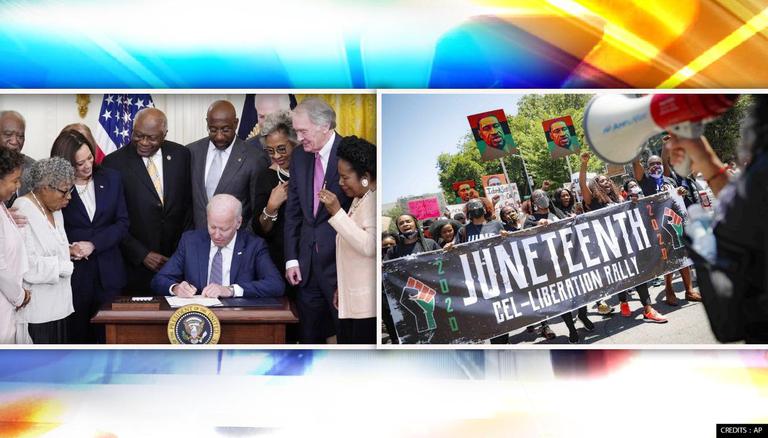 
US President Joe Biden on June 18 signed a law making Juneteenth, which commemorates the end of slavery in America, a national holiday recognised by the federal government. After signing the bill into law, Biden said that Juneteenth marks both a “long hard night of slavery subjugation” and a “promise of a brighter morning to come”. The US President added that June 19 is a reminder of the terrible toll that slavery took on the country and continues to take.

Now, Juneteenth will be the eleventh federally recognised holiday in the US, coming nearly four decades after the last one which honoured American civil rights activist Martin Luther King Jr. It will enjoy the same status as the 10 existing annual holidays, which include Memorial Day, Veterans Day and Thanksgiving. The latest addition to the legislation comes a year after the killing of Geroge Floyd triggered anti-racism protests across the country, bringing about a national reckoning on systemic racism.

Juneteenth is also known as Freedom Day, Liberation Day and Emancipation Day across America. On June 19, 1865, the announcement was made that tens of thousands of African-Americans in Texas had been emancipated. This closed the door on one of the final chapters of slavery in America. Juneteenth traces its origins back to Galveston in Texas when Union soldiers, led by Major Gen. Gordon Granger landed in the city on June 19, 1865. They arrived with news that the Civil War had finally ended, and slaves were now free to go.

The announcement was made two-and-a-half years after President Lincoln’s Emancipation Proclamation of January 1, 1863, was announced, that freed slaves in all the Confederate States of America. Since then this day was celebrated occasionally until it was revived during the Civil Rights movement of the 1950s and 1960s. Establishing the holiday, according to congressional leaders from both parties, was a significant step in commemorating those who suffered as a result of American slavery, as well as an act of racial healing.