US President Joe Biden on Tuesday, 12 October, discussed counterterrorism and rescue efforts in Afghanistan in a virtual meeting with Group of 20 (G-20) leaders 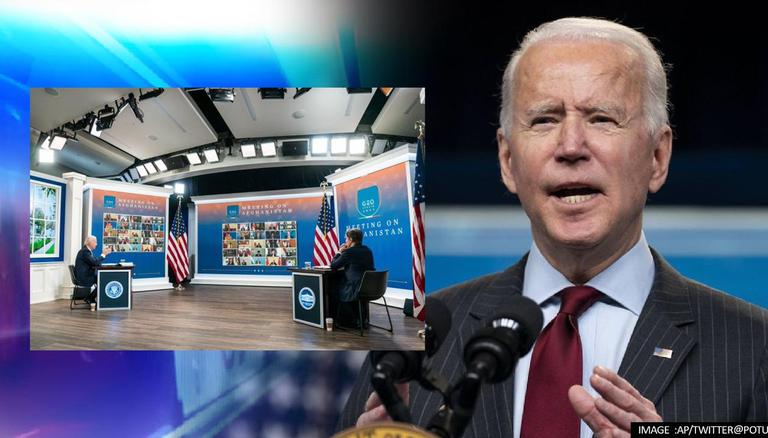 
US President Joe Biden on Tuesday, 12 October, discussed counterterrorism and rescue efforts in Afghanistan in a virtual meeting with G20 leaders. According to a White House statement, during the meeting, the world leaders discussed the critical need to maintain a “laser-focus” on enduring counterterrorism efforts. They also underscored their commitment to providing humanitarian aid directly to the Afghan people through independent international organisations.

“The Leaders discussed the critical need to maintain a laser-focus on our enduring counterterrorism efforts, including against threats from ISIS-K, and ensuring safe passage for those foreign nationals and Afghan partners with documentation seeking to depart Afghanistan,” the White House said, referring to the Islamic State's affiliate in Afghanistan.

“The United States remains committed to working closely with the international community and using diplomatic, humanitarian, and economic means to address the situation in Afghanistan and support the Afghan people,” it added.

This morning, I met virtually with G20 leaders on Afghanistan. We’re committed to working closely with the international community and using diplomatic, humanitarian, and economic means to address the situation in Afghanistan and support the Afghan people. pic.twitter.com/eQeCLEb0cb

The Taliban took over Kabul presidential palace in August after the US Army ended its 20 years of military presence in the country. In the following weeks, the World Bank and the International Monetary Fund suspended financial aid to the nation. The United States also froze billions of dollars in assets belonging to the Afghan Central Bank.

Last week, the Taliban, however, urged Washington to unfreeze Afghan’s central bank reserves. During the first in-person meet in Qatar, Taliban Acting Foreign Minister Amir Khan Muttaqi told his American counterpart that they want to engage with the international community and will not be in favour of one country and against the other one.

Afghanistan on verge of ‘humanitarian meltdown’

Meanwhile, on Tuesday, the G20 leaders agreed that they have "no option" but to involve the Taliban in sending humanitarian aid to Afghanistan. The world leaders agreed to act through the United Nations and its agencies to provide aid to the war-torn nation, which is on the verge of a “humanitarian meltdown”. Mario Draghi, the Italian PM and the current rotating chair of the G20, said that it is “very hard” to see how the world can help people in Afghanistan without involving the Taliban.

“Addressing the humanitarian crisis will require contacts with the Taliban, but this does not mean their recognition. We must acknowledge that they will be judged for what they do, not for what they say,” Draghi added.