CDS General Rawat on Thursday met the US Chairman of the Joint Chiefs of Staff General Mark A Milley in Washington, DC, and discussed a range of issues. 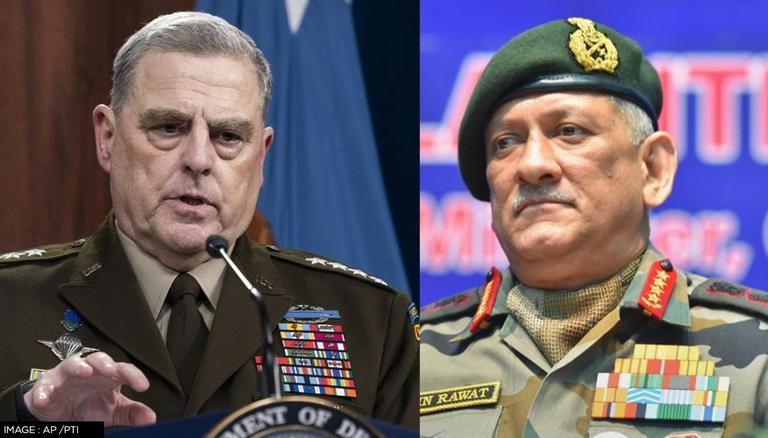 
Chief of Defence Staff (CDS) General Bipin Rawat on Thursday, 30 September, met the US Chairman of the Joint Chiefs of Staff General Mark A Milley in Washington, DC, and discussed a range of issues including ways to ensure regional security. According to a press release, Milley welcomed General Rawat during an Armed Forces full honour arrival ceremony on Joint Base Myer-Henderson Hall. The two military leaders then met at the Pentagon, where they agreed to continue cooperation in training exercises and creating more opportunities to increase interoperability between the two militaries.

Chief of Defence Staff General Bipin Rawat met his US counterpart General Mark Milley and the two officers discussed a range of issues, including ways to ensure regional security and their respective roles as principal military advisors to civilian leadership, the Pentagon said pic.twitter.com/82WYJFBgwg

During the arrival ceremony, General Rawat laid a wreath at the Tomb of the Unknown Soldier as part of his official visit. US General Milley even thanked General Rawat for his “meritorious service and leadership, which has contributed greatly to the strength of the US and India partnership”. Later, at Pentagon, they both discussed a range of issues, including ways to ensure regional security and their respective roles as principal military advisors to civilian leadership.

“The US and India share a strong military-to-military relationship under the US-India Major Defense Partnership, which supports a free and open Indo-Pacific,” the statement read.

The @MDW_USARMY commanding general hosted the ceremony and Rawat was greeted by the chairman of @thejointstaff and ANC superintendent. pic.twitter.com/Rb5ExIAKkK

General Rawat is on a visit to the United States. Earlier this week, he had visited Joint Base Lewis-McChord in Washington and discussed issues of bilateral defence cooperation with US Army’s Major General Xavier T Brunson, Commanding General, 1 Corps. According to a statement released by Bureau of Political-Military Affairs, US, “India is essential to accomplish our common vision of a free and open Indo-Pacific. The Political-Military Affairs (PM) Bureau, in collaboration with interagency partners, promotes the United States-India defence trade relationship and larger security alliance.”

It further read, "The United States named India as a Major Defense Partner in 2016. In accordance with this designation, India was elevated to Strategic Trade Authorization tier 1 status in 2018, granting India license-free access to a wide variety of military and dual-use technologies regulated by the Department of Commerce. With the Logistics Exchange Memorandum of Agreement (LEMOA), Communications, Compatibility and Security Agreement (COMCASA), and Industrial Security Agreement (ISA) currently in place, US-India defense trade collaboration is expanding."