A Chicago Subway got closed after a social media video showed an employee mopping the counter in Englewood. CDPH took swift action and has closed down the store

Sometimes cleaning can be tough as an unnamed employee of subway got to know after he cleaned the counter with a dirty mop. The video of him cleaning the drinks counter went viral on Twitter with netizens showing concern and revealing their humorous side on the micro-blogging site.

READ: UP Police Get Trendy, Take Up The #TetrisChallenge; Netizens React

As per reports, the viral incident happened on September 26 when a submarine sandwich shop in Englewood neighbourhood near 69th Street and Ashland due to which Chicago Department of Public Health (CDPH) closed the shop due to concerns. The government department closed it after a video clip of employee wiped the mob across the counter near a drink dispenser was noticed on social media.  The reporter had gained hold of the 2-second clip and later shared it on Twitter on September 26 where the incident was viewed nearly 1,200 times with alleged claims that the mop was used on the floor.

Here’s a short clip of the @SUBWAY worker using the mop to clean the soda counter. pic.twitter.com/8xBHVZWdU6

Reports suggest that it is not clear when the Subway employee wiped the counter with a dirty mop, CDPH reacted swiftly on September 26th morning by putting up a 'license suspended sign' in store's window advising customers to leave who were there at the time of putting up the notice.

The video has been viewed over 1,200 times already with hilarious reactions. One user commented, “And open-toed shoes is a huge no in any restaurant.” “Two things, The mop and the sandals,” said another. Another user tried to identify the culprit by saying, “I'm very confused as I would assume it is possibly an owner and not an employee, employees are required to wear the green polos or in the past, it was black and also closed-toe shoes are mandatory and they were wearing sandals...” Another user said that “First the jalapeno conspiracy now this.” “Omg, that is just nasty and with her feet out.” 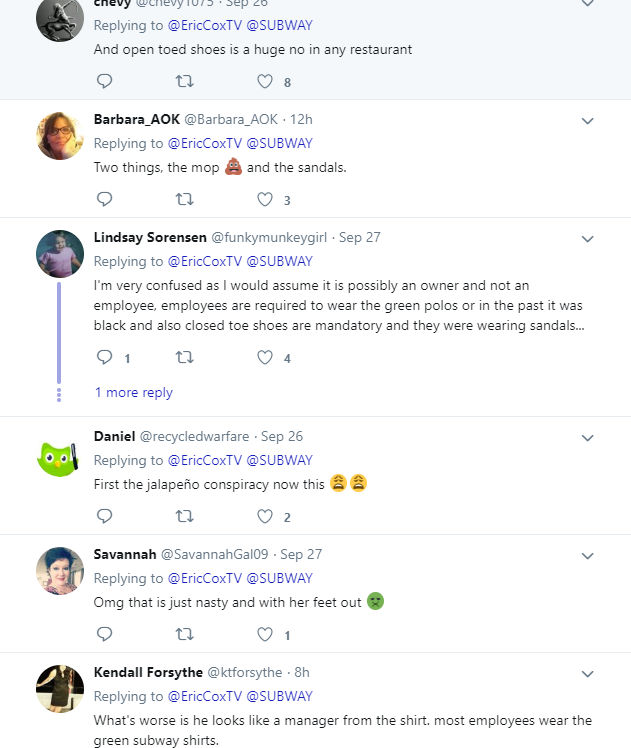