In another attempt to woo New York residents to get inoculated against deadly COVID-19 infection, health authorities have added a distinguished Museum. 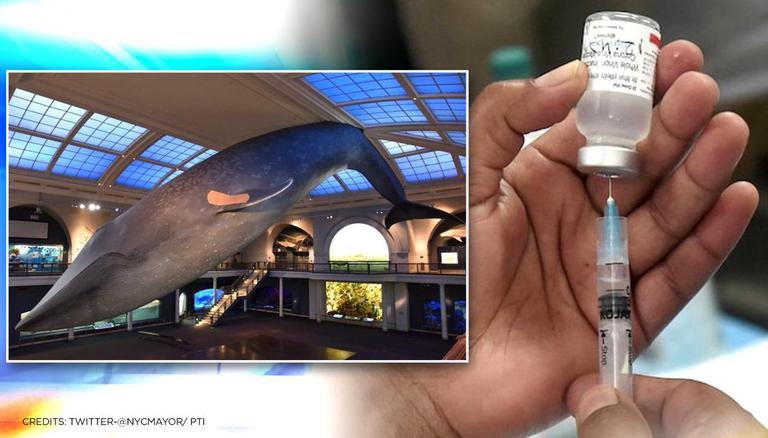 
In another attempt to woo American residents to get inoculated against deadly coronavirus infection, health authorities have added the distinguished American Museum of Natural History to the list of vaccination sites. All the eligible candidates would be able to register themselves for the mass inoculation process in the Museum’s iconic Milstein Hall of Ocean Life, which is known to highlight the drama of the undersea world. At present, the state allows all residents ageing 16 years and above to get the COVID-19 jabs.

Announcing the news on social media, Mayor of New York City Bill de Blasio wrote, “We’re WHALE-coming #COVID19 vaccines to the American Museum of Natural History!” His tweet referred to the gigantic 94-foot blue whale model that hangs right above the vaccine registration spot. Further in his tweet, he called the members of the New York City Housing Authority, cultural workers, members of DC37, and museum staff to get shots on priority.

This site is for everyone but especially for our @NYCHA housing residents, cultural workers, members of DC37, and museum staff. Whale see you there! pic.twitter.com/WLvnziNho0

Just last month, Associated Press reported that a coronavirus vaccination centre in New York was playing live music for all the people who get their vaccine jabs. In a unique move to encourage vaccination, Jacob K. Javits Convention Center has now set the stage for live musicians who delight immune citizens by playing compositions by ace musicians including Antonio Vivaldi, Wolfgang Amadeus Mozart, Johann Sebastian Bach amongst others. The played music is part of a series of daily, two-hour midday concerts from a collaboration between the nonprofit group Sing for Hope and violinist Victoria Paterson, Associated Press reported.

Speaking to the Associated Press, Pianist Barbara Podgurski said that her recent performances at the vaccination site was the first public performance she made since the COVID-19 hit the city. “There were three months where I didn’t play the piano because I felt hopeless," she said. “The reaction … I haven’t heard in a year. You realize how much people need music in their lives, to feel beauty and magic. It gives them hope," she said.