Democratic 2020 presidential candidate Mike Bloomberg has come up with a 'marketing, communication and advertising' MEME strategy to break Trump's campaign.

Democratic 2020 presidential candidate Mike Bloomberg has come up with a 'marketing, communication, and advertising' strategy to break the Republic's extremely social campaign for US President Donald Trump. Bloomberg has now hired some of the biggest meme-makers on the internet to create sponsored posts which will further promote his campaign.

According to international media reports, Bloomberg has paired up with Meme 2020 to advertise his Presidential campaign and appeal to the masses. While Meme 2020 is a relatively new company, the people behind it are also the people behind various influential accounts across various social media platforms.

In the form of fake direct messages from Bloomberg where he is seen portraying himself as a meme, the material has now become an internet sensation. Bloomberg's campaign has also got several well-running meme pages nad have posts go up regularly.

READ: Bloomberg Once Blamed End Of 'redlining' For 2008 Collapse 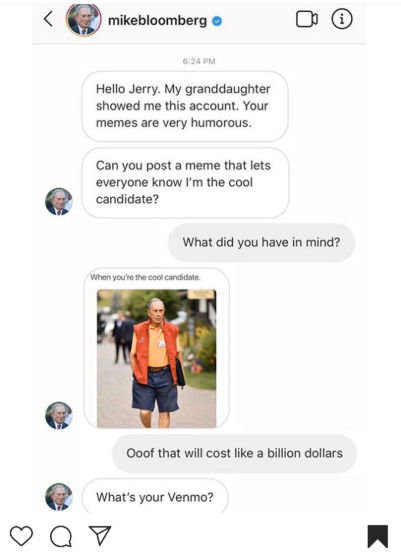 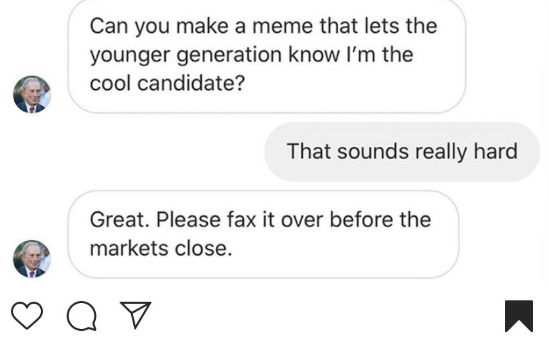 While speaking to an international media outlet, a senior national spokeswoman for the Bloomberg campaign said that his 2020 team has teamed up with social media creators to collaborate with the campaign, including meme world. She further said that while a meme strategy may be new to presidential politics, the team is still betting that it will be an effective component to reach people where they are and compete with Trump's powerful digital operation.

In a statement, while running for the President, Bloomberg had said that he is running for President to 'defeat Donald Trump and rebuild America'. According to the 77-year-old former Republican, the citizens 'cannot afford four more years of President Trump' along with his 'reckless and unethical actions'. The stakes at the 2020 elections are high, and Bloomberg stresses that Democrats must win this race in order to rebuild America.

Bloomberg also believes that his unique set of experiences in business, government, and philanthropy will be the reason that defines his victory. The 77-year-old presidential candidate said in an official statement that he has the skills to "fix what is broken in our great nation" because America is at its best when citizens along with politicians work together.