Former President of the United States, Donald Trump has been awarded a 9th Dan Black belt by Kukkiwon, the headquarters of the World Taekwondo Academy. 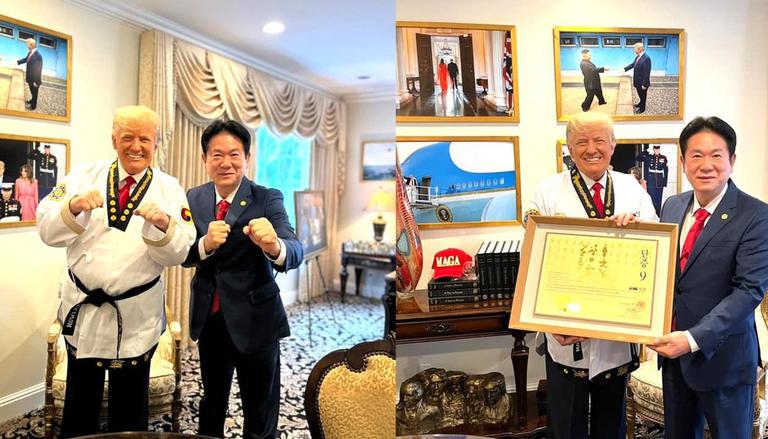 
Former US President Donald Trump has been awarded an honorary 9th Dan Black belt by Kukkiwon, the headquarters of the World Taekwondo Academy. It is the highest level attainable by professional martial artists. Lee Dong-seop, the president of Kukkiwon, paid a visit to Trump at his residence in Florida to present him with a taekwondo black belt, reported Daily Mail on Monday. A South Korean resident in the United States is said to have organised the meeting. "I came to know that Donald Trump is quite interested in Taekwondo," Lee was quoted as saying by the outlet.

Responding to the gesture, Trump stated, "It is my honour to receive Honorary Dan Certificate and I think Taekwondo is a magnificent martial art for self-defence. I wish to see Kukkiwon Taekwondo Team's demonstration," as posted by the official Facebook account of Kukkiwon. The award puts Trump on par with Russian President Vladimir Putin, who received a black belt and was made a grandmaster of taekwondo during his visit to South Korea in 2013. Even without practising taekwondo, Putin was able to obtain the coveted rank. Meanwhile, the Republican leader and the 45th President of the United States also promised to wear his taekwondo gear in Congress if he manages to return to the White House in the future, reported the outlet.

Ready to talk to Prez Biden if it 'could help' country: Trump

On November 9, Trump confirmed that he has not spoken to incumbent President Joe Biden for a long time but is open to doing so if it "could help" the country, reported Fox News.  Earlier this year in January, Trump skipped Biden's inauguration, making him the first president since 1869 to ignore his successor's inauguration. On being asked if he would be willing to contact President Biden, Trump said that he would if that helps the country in any way. Meanwhile, he was quick to add that they both have a very different view.

According to the former President, the country is "going to hell" and being "forsaken." "Leaving every silly things side, if we just focus on making America great, we would be beating everybody," Trump was quoted as saying by Fox News. During the presidential campaign in April 2020, Trump and Biden had a rare phone conversation to discuss strategies relating to the coronavirus pandemic's early days. Notably, at that time, the conversation was described as quite positive by both Trump and Biden.